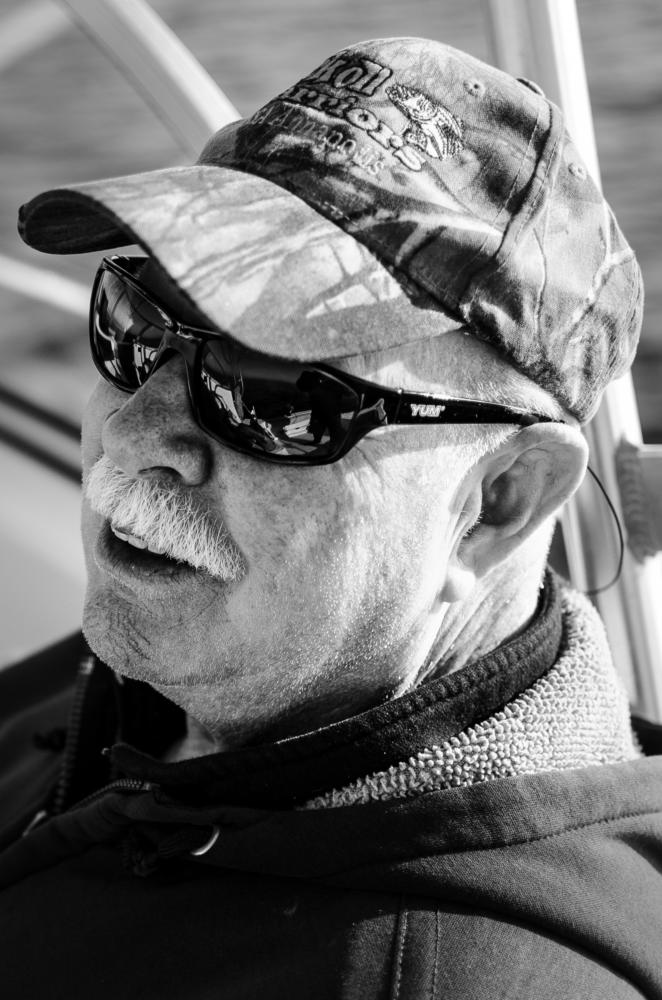 April 20, 1951 curious bright blue eyes blink open to observe a very peculiar sight, two smiling faces blotting out the view of the Bethesda Naval Hospital maternity ward, the same smile is returned briefly before being snatched away by a nurse and checked for positive vitals, Ronald Lee Barchers had just been introduced to the world.

Parents Ernest and Norma Barchers would eventually fill out the family tree with three children: Steven Douglas Barchers, Ronald Lee Barchers and Joy Elaine Barchers (Carter). It’s been said that arguably the best years to grow up were in the 50’s and 60’s, and in the suburbs of Twinbrook, located in the city of Rockville, MD were no exception.

Ronald would attend Richard Montgomery High School as a Freshman in 1966, and it was during one of these school nights at a local bonfire, that a chance meeting with Patricia Ann Shipe (Barchers) would lead to 6 years of dating and 48 years of marriage.

A sense of adventure and competitiveness enables Ron to letter in Cross Country Track and with America in a state of war for over 14 years, duty calls.  One week after graduation, a young recruit is standing on a pair of yellow boot prints at Marine Corps Recruit Depot Parris Island.

A tour of duty in Vietnam with the 1st Marine Division would instill attributes and characteristics in Ronald that would carry him for the rest of his life: Duty, Honor, Integrity, Humility and Compassion.  There is nothing like a few epic skirmishes during a year-long deployment to put the frailty of life in perspective, so upon arrival stateside, Ron wasn’t taking any chances.  He married his high school sweetheart Patricia and started his 30-year career as a Master Firefighter combined with 45 years as a School Bus Driver.

Throughout Ron’s illustrious dual pilgrimage, he would receive numerous awards and accolades, but nothing was more gratifying than being a first responder on the morning of September 11, 2001 when American Airlines Flight 77 slammed into the west wall of the Pentagon killing 189 individuals.

Free time was scarce, but when he had it, Ron would take the time out to raise his three boys, Erick August, Aaron Lee with wife Kimberly Lynn Williams (Barchers) and Kyle Robert Barchers and the preferred activity was wetting a line on the Chesapeake Bay. Fishing became more than a hobby to the Barchers family, it was what all enjoyed the most.

Nothing put a smile on the old man’s face like loading up the family truckster and heading to the Outer Banks of North Carolina for the annual summer vacation. A week of sun soaked, salt infused fishing adventures and some much needed relaxation that everyone loved.

In 1997 the family would move from Gaithersburg to Port Republic where Aaron and Kyle would attend middle and high school. Ron loved to read books and educate the masses on his findings in every type of book known to man. He also enjoyed sharing stories about any adventure that he was a part of and all the neighbors and friends from school flocked at the opportunity to be entertained by such stories. Ron would soon be known as “Pops.” The latest edition to the family would come only 4 years ago as the daughter to Kyle, Kylee Lynn Barchers, Ron’s little pride and joy as a first time ever grandfather, she was his world.

There was nothing that Pops wouldn’t do to help out anyone in need. From freeing cars stuck in the snow to cutting someone’s lawn for them or taking in kids and being a father figure and role model for them, Ron was always willing to extend a helping hand. This kindness and generosity didn’t go unnoticed. He was a hero to all who knew him.

On 28 July 2020, Ron would lose the battle to COVID-19 and those curious blue eyes closed for their final time. With a darkness that envelops the Barchers family also comes light that shines in the form of remembrance and love. A truly selfless warrior that will always be loved and missed by all.

Miss you already, brother. Too soon we grow old and too late we gain wisdom.

May your soul and the souls of all the departed, through the mercy of God, rest in peace.

Sorry for your loss. You all are in my thoughtful and prayers.

I am so sorry for your loss. Our thoughts and prayers are with you during this difficult time. I only met Pop’s once but we stood around the grill talking FD for a long time. Godspeed Brother.

Our thoughts and prayers are with you Pat, Erick, Aaron, Kim, Kyle, Shannon and Kylee. Ron will be missed and never forgotten. We will cherish the memories we have from working with him in Bethesda Fire Department, a great fire fighter to Local 1664 where he was our 8th District Rep. Ron had more motions seconded to get the business done. He loved fishing on the Chesapeake Bay. We will always remember the good times we had with him fishing. Dar and Ken

Ron,
You were my cousin by blood
My brother in spirit
and
My brother in arms, “Sempre Fi”
Until we meet again.
Rest in peace.
Our condolences and prayers to the family.

Pat and Family,
I just got the news on the passing of Ron. I am so sorry to hear this. Please know that I will keep you and your family in prayer as you navigate this difficult time.

With Much Love,
Michelle Simmons

A first class firefighter and glad I got to know him. Although on different shifts at station 6, we all knew each other pretty well and he kinda ruled the station in his own way. Condolences and prayers from Patty and me to you all.

My sincere condolences on your loss. I will miss Ron, he was a true friend and brother firefighter I enjoyed working with at Bethesda.
Thoughts and prayers

I am praying for you Pat and family…rest in peace!

My deepest sympathy to Pat and all of the family. Prayers for peace and comfort in the days to come. May many good memories fill your thoughts. Chris Carter and family

My prayers go out to Ron’s family. I worked with Ron at Bethesda Fire Department. Ron was a true friend and great fireman. He will be missed by all .

My thoughts and prayers to your whole family. I met you when I was about 16 and you had always been so generous with your time and educating me about the Fire Service. Thank you for all your years of service brother. My God watch over those you love and left behind and may you Rest In Peace. 💙. Kelly M. Mulkins (MCFRS-Ret)

Condolences to Ron’s family from his cousin (Marquita Griffin Klaver) and uncle (Don Griffin) in Iowa. We were so sorry to learn of Ron’s death. We haven’t seen each other for years but I have many memories of family gatherings when we lived in Maryland and family reunions in Missouri. May you have God’s strength and peace as you grieve your loss.

Prayers to Ron’s family. Great to have worked with him at the BFD, Great Fire Fighter and Fisherman. RIP Brother.

I worked with Ron at the Bethesda Fire Dept. He was a great firefighter, and more importantly, a great person. I am honored to have considered him a friend, he will be missed.

My sincere condolences on your loss. I will miss Ron, he was a true friend and brother firefighter I enjoyed working with at Bethesda Bus lot

My thoughts and prayers to the family of Ron! I never got to work with Ron, but whenever I saw him at the retirement banquets we would always chop it up and he was always so nice! R.I.H. Ron! God Bless!

Ron you truly will be missed. My thoughts and Prayers to your Family.

pat my prayers are with you and your family at this sad time. Ron will be missed. I have had the pleasure to work with him these last 15 years and we became good friends. Please keep in touch.

Condolences on the loss of your dear Ron. You are in our thoughts and prayers. Marie and I will always remember being invited to our first BFD shift party at your home in 1974. It was always a pleasure working with Ron. Great firefighter, person and brother Marine. Semper Fi!

A true loss for all that knew Ron, a great person to be around . He taught me a lot working with him in the BFD and I always respected what he had to say.
Ron will always be in my thoughts.

Ron, you will be missed. You were a great firefighter one who knew the JOB. And great to work with. Thanks.

Jack Crowley
Street, Md
My condolences to Ron’s family and friends. Ron was was a co-worker, friend and brother firefighter, he will be sorely missed by many, many firefighters, and friends. May he rest in peace.

Dear Pat, Family and Friends,
Thoughts and prayers from my Wife, Sandy and I on your loss. Ronnie was one of the good guys! It was always a pleasure to see You, Ronnie and the boys. Semper Fi, Marine! God will be there to greet you in Heaven…

Kyle and family,
I’m so sorry for your loss at this time. I myself have lost both parents and a stepfather in the past 15 months. I know it is a difficult and sad time, embrace all the wonderful memories, count your blessings, reflect and appreciate all of life’s good and bad lessons you have learned through your father. Turn to the Lord for comfort and guidance in this sorrowful time.
Much love my brother.
Captain Dave

Ron was such a nice bus driver he always knew how to put a smile on my face when ever I was having a bad day and I’m gonna forever miss him.💕the family forever In my prayers.