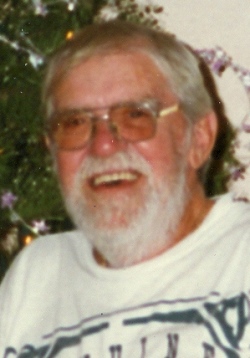 Ronald Cook Heister, 89, of Charlotte Hall passed away December 9, 2014 at Charlotte Hall Veterans Home. He was born March 25, 1925 in New Kensington, PA to Paul and Margaret (Cook) Heister. Ron was raised in Georgetown and attended D.C. public schools. He enlisted in the United States Navy on September 5, 1942 and served aboard the submarine USS Pompano. While serving he received the Pacific Theatre, Gold Conduct, American Theatre Ribbons and the Victory Medal. Ron was honorably discharged on March 24, 1946 at the rank of Storekeeper 2nd Class. He married Elizabeth Long on August 16, 1945 and they lived in Georgetown, and later in the Maryland suburbs of Washington, D.C. Elizabeth passed away in 1975. Ron then lived in Bowie, Rock Hall, and Lexington Park and moved to Charlotte Hall in November 2011. He was employed as a Master Plumber for George F. Warner Plumbing Company in Suitland, where he was a manager for many years. Ron was a member of the American Legion in Rock Hall. In his leisure time, Ron enjoyed boating, working with his hands and reading.

He was preceded in death by his parents, brothers Newt Davis, and Paul and Robert Heister, and his wife Elizabeth Long Heister. Ron is survived by daughters Ronnie S. Kahl and husband JR of St. Leonard, Betty L. Baker and husband Bill of Hyattsville, Lynn M. Heister of Rockville, and Rebecca L. Heister of Cape Hatteras, NC and a son Marc E. Heister and wife Melanie of Prince Frederick. Also surviving are a brother Leonard Davis of Golden Beach, and a sister Sarah Fones of Stevensville, and numerous grand and great-grandchildren.