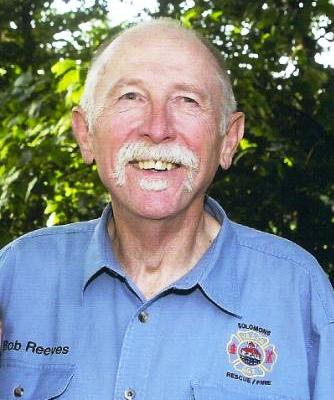 Robert Arden “Bob” Reeves, 66, of Solomons, MD formerly of San Diego, CA passed away on July 28, 2012 at his home surrounded by his family. He was born on August 24, 1945 in National City, CA to the late Pearl and Arden Reeves. He was the beloved husband to Julia Ann Reeves whom he married in Winterhaven, CA on April 29, 1966.
Bob graduated from Hoover High School in 1963 and went on to graduate from Mesa and San Diego State College in 1966. He was a Program Manager for the U.S. Government and retired after 35 years of service on January 3, 2001. In 2003 at the age of 57 Bob joined the Solomons Vol. Rescue Squad and Fire Department and quickly became a First Responder and Driver. At the age of 60, he took and passed the class of Firefighter 1and earned the respect of many fellow firefighters. He also served on the Board of Directors and Constitution Committee as well as became a Life Member of the department on July 12, 2012.
Bob is survived by his wife of 46 years Julia Ann Reeves of Solomons, MD; children, Joseph Reeves and wife Wendy of Falling Water, WV, Jennifer Miedzinski-Reeves and husband David Miedzinski of Hollywood, MD, and Caroline Hedegaard and husband Daniel of Lusby, MD; grandchildren, Joseph, Weston, Adam, Ryan, Sarah, and Robert; and a sister, Susan J. Nobbs, of Susanville, CA.