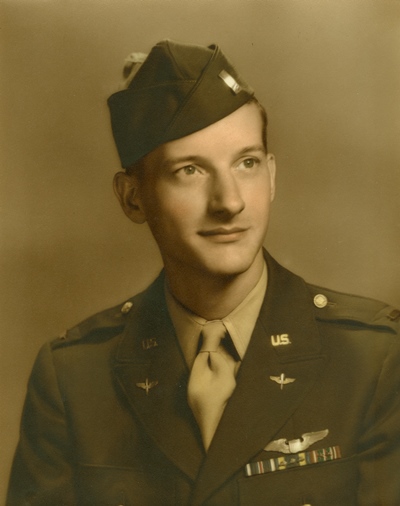 The family announces the passing of Richard Riley Johnson of Deale, Maryland at the age of 94. He grew up in the Midwest but joined the Army Air Force in 1942. He was a B-17 pilot during World War II, flying 32 missions over Germany with two of those missions on D-Day. After the war he was a flight instructor for the Army Air Force but returned to civilian life after the war ended where he moved first to Norfolk, Virginia then to Deale, Maryland in 1946. He was a contract painter in the Annapolis area for over 50 years working on many of the historic homes in Annapolis such as The Hammond Harwood House and The Paca House. He continued his interest and involvement in Aviation and was an officer in the Maryland Wing of the Civil Air Patrol in the 60s and 70s. He served in several capacities of the 303rd Bomb Group Association before becoming President and he and his wife, Marjorie, traveled year-after-year to the group’s annual reunions. He also had an extensive collection of Native American artifacts from the Midwest which he began collecting as a young boy. His love of archeology lead him to the shores of the Chesapeake Bay where he also amassed a large collection of artifacts from the areas surrounding the Bay. He was President of the Anne Arundel County Archeological Society (1975-1986) and then became President of The Archeological Society of Maryland (1986-1990). In 1986 he was the recipient of the Marjorie Murray Bridgman Award honoring his contributions over the years in the field of archaeological preservation in Anne Arundel County. In 2004 he donated his Native American artifact collection to the Anne Arundel County’s archeology program. He was appointed to the Board of Trustees of London Town Public House (Edgewater, Maryland) in 2009 and served on the Board until 2012. Mr. Johnson had a tremendous sense of humor and whit which he used often and he sang a varied repertoire of songs. His book entitled “Twenty-five Milk Runs” chronicles his life as the son of migrant farm workers, his time during the war, and his family life in and around Deale. He leaves behind his wife of 61 years, Marjorie Moreland Johnson, his son Carl Johnson of Deale, Maryland (wife, Jean), his daughter Leslie Livacz of St. Thomas, Virgin Islands (husband, David) and his daughter Brenda McAlwee of Aquasco, Maryland (husband, Frank), his granddaughter, Amber Hancock of Brandywine, Maryland (husband, Mike), his grandson, Richard Livacz of St. Thomas, and his great-granddaughters, Ashlynn and Autumn.