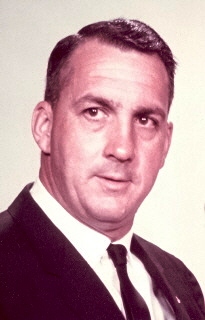 Richard Nelson Garner, age 86, of Chesapeake Beach, MD passed away at home on January 20, 2013. Richard was born July 26, 1926 in Washington, DC to Guy Nelson and Ruth Ramona (Archer) Garner. He grew up in North East and attended Coolidge High School and was on the track team. He received his parents’ permission to join the Navy on July 22, 1944. Richard was stationed on transport ships serving in both the Atlantic and Pacific Oceans. He was discharged June 8, 1946. After his discharge he attended and graduated from Veterans High School in 1947. He then went to work as a machinist at Bolling Air Force Base. Richard was married to Patricia Bratton on July 3, 1948 in Assumption Catholic Church, Washington, DC. In February 1959, Richard and Lois Moore were married at Seat Pleasant Methodist Church. In 1950, Richard went to work as an auto glazer for Ace Auto Glass in Washington, retiring in July 1988.He was and avid Washington Redskins fan and enjoyed swimming, tinkering around the house and traveling to Florida to visit relatives.

Richard was preceded in death by his wives Patricia and Lois Garner and two step daughters Patty Hoffman and Janice King. Surviving are a daughter Denise Treece and her husband Jeff of Hopewell, PA; a son Richard N. “Rick” Garner, Jr. and his wife Wendy of Federalsburg, MD; a step-son Roy Hoffman, Jr. and wife Delores of Mechanicsville, MD; eight grandchildren and fifteen great grandchildren.