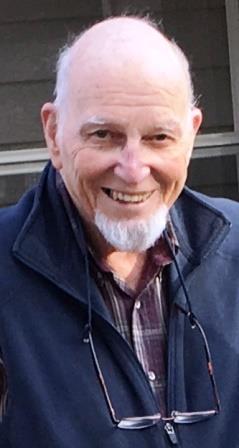 Richard Edwin “Dick” Wilson died peacefully at his residence in the Asbury-Solomons Retirement Community on Sunday, February 11, 2018. He was born on December 16, 1931, in Omaha, Nebraska, the oldest of four children. He was predeceased by Jerry (Jerka) Domic, his wife of 27 years. Together they had two children, Kenneth Jerome Wilson and Patti Ann Wilson-Franzoi. They spent many happy years raising their children in Hawaii, Guam and New Jersey.

Dick enjoyed his career as an Air Traffic Controller, which he embraced after serving four years in the Air Force. He retired from the FAA after 34 years and continued working as a consultant on air traffic control projects until 1997. He earned his Bachelor’s Degree from the University of Maryland in 2003, at the age of 72.

Dick and his partner of 30 years, Eliot Girsang, “Ellie” delighted in living along the Chesapeake Bay where they enjoyed entertaining friends, boating and crabbing. A favorite activity for both was attending the theater. For a number of years he was the Bay Weekly Theater Reviewer.

Dick’s favorite pastime for 50 years was SCUBA diving. He and Ellie loved traveling to remote and exotic places to dive, especially Indonesia. When he retired from diving he became an avid Bridge player, having recently achieved the rank of Advanced NABC Master.

All who knew Dick were touched by his gentle manner and kind ways. He was dearly loved and will be missed by Eliot Girsang-Wilson; his son, Kenneth Wilson; grandson, Jerry Mason Wilson; daughter, Patti Ann Wilson-Franzoi; son-in-law, John Franzoi; sister, Judy Hauer; nephews Dave and Luanne Nosker and Tom and Melanie Nosker; and sister-in-law, Roena Wilson; step-children Peter Jungblut, Marlene Botts, Mark Girsang and Alyssa Hammond along with his many grandchildren.

A Memorial Service will be held on Sunday, February 18, at All Saints Episcopal Church in Sunderland, MD, at 1:00 PM. There will be a reception at the church immediately following the service.

Please, no flowers. Tribute to his memory can be made with donations to: The Nature Conservancy, Conservation International, Ocean Conservancy, Doctors without Borders, or Asbury Benevolent Association.