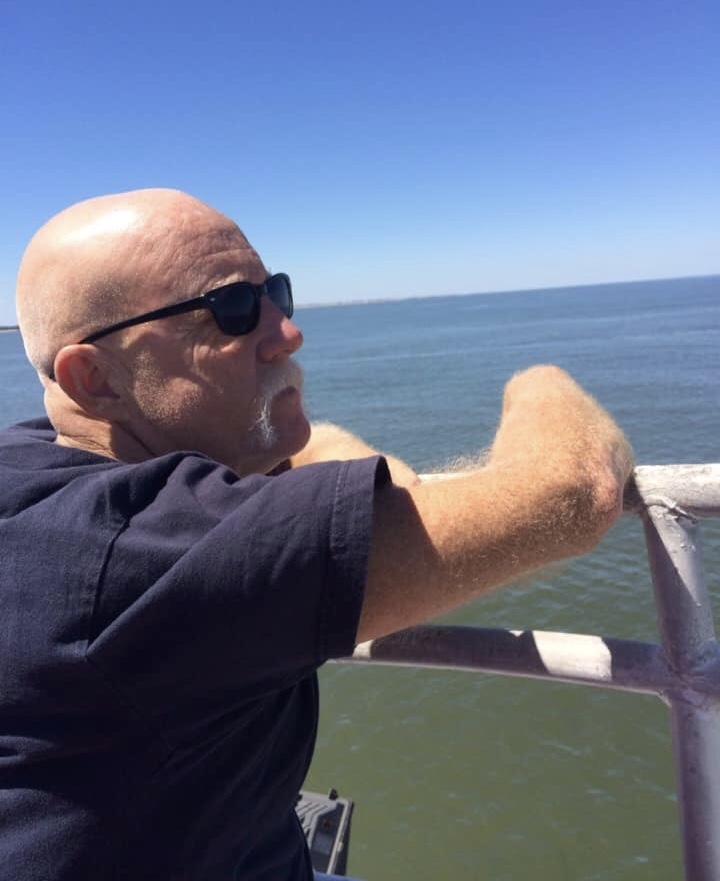 Richard Edward Elliott “Rick” Burbank, 66, of Lusby, MD passed away peacefully, surrounded by his family at his residence, on December 20th 2019 after a year-long battle with ALS.
Rick was born in Charleston, SC on April 14th 1953 to the late Gladys Pauline (Polly) and Edward (Eddie) Burbank. A lifetime resident of Calvert County, Rick graduated from Calvert High School, went on to an apprenticeship, and became a Journeyman Millwright. He also worked, for a time, at the Maryland Pilots’ Association in Solomons, the State of Maryland at Jefferson Patterson Park, and St. Mary’s College. In 1972, Rick met the love of his life, Angela (Ann). They were married in 1978, and they built an incredible life together. Their daughter, and the joy of Rick’s life, Leigh, came along in 1990, and they were a pair to be reckoned with ever since.

Rick enjoyed spending time with his family and friends, boating, fishing, camping, shooting skeet and sporting clays, playing with his dog, picking crabs on the front porch, and riding around in his golf cart.

Angela and Leigh
I am so sorry for your loss. My thoughts and prayers are with you.

I truly wish we had not wasted so much time.
As I get older, I see more now how fast this life ticks by.
Good bye Cousin. Good bye Ricky.

I can close my eyes and hear Ricks voice saying, “We’re not here for a long time; we’re here for a good time …”
Rick was a man that always had his priorities straight and for that, he was a gift and a blessing unto all who knew him.
Ann, Leigh, we are so sorry for your loss.
Words seem so insufficient in the wake of such a loss; our prayers are for fond memories and Rick’s legacy to everyone, when the time is right for each individual, eclipse the very real sense of loss being felt by all of us …

Condolences from Tom & Darlene Stalcup. Rick was a great guy and friend to many at Sanner’s Lake. We will always remember how Rick and other members at Sanner’s were there three years ago when our daughter was in an accident. He will be missed.

I am so sorry for your loss. Rick was a good man and I wish we had not loss contact. In my heart he will always remain. Love and peace to your family. Carol Elliott Smith

Ann, Leigh and Loved ones of Rick. Many condolences, prayers, and wishes for peace that transcends human understanding. I am touched to hear of his passing and I remember feeling his deep spirit tho many moons ago. I see that the words “We’re not here for a long time; we’re here for a good time …” quoted above. Synchronicity? Those words from the Drake song were also the title to my sweet Anna’s Instagram account. See: http://Www.puravida.guru

Ann and Leigh, we are so sorry for your loss. Rick’s passing is a loss to us all.

I have fond memories of his tales of growing up in Solomons, our trips to PG Skeet, shooting at Sanners, and a shared beer or two. He was always a class act, helpful volunteer, an inspiration and friend.

May he Rest In Peace and in our memory.

Dear Cousins Ann and Leigh,
You are in my thoughts and prayers. It seems only yesterday that I visited with my Dad and we visited with Norm and Bobbie and you. I remember Rick as a solid supporter of all the family. I am sure that he will live on in your hearts, may those memories be of times well spent! I am also sending Rick a WHOOSH of spirit to carry him on his journey beyond that he may find joy and peace.
With Love,
Marc

Rick was a good man,and will be missed by alot of people. The time we have is so short. My prayers are with you Mrs Burbank and Leigh. I remember spending time with you and Rick.

I will long remember Rick’s welcoming, friendly smile and firm handshake each time we met at Sanner’s for skeet or clay sport. Rick has, I’m sure, received the same from all those who have gone before him.

Rest in peace, my friend.

Ann and Leigh, you have been so blessed with such a great man in your lives. He always said we’re not here for long. I think he made the best of what God gave him. I’m pretty sure God is saying well done Faithful servant. I know the best place for him is right beside you. Ann I’m So very thankful I was able to spend some time with you both a few weeks back ( funny how you can not see each other for a long time but it seems like only minutes when you get together). You are being lifted up and covered in prayer. Glenn and I are here for you if you need anything.

So sorry for your family’s loss. Thoughts and prayers to you all. He was a good friend and fellow Journeyman Millwright to both my dad “Bud” Kesecker and brother Jim (both of whom have passed). May they all be rejoined, god bless them.

Ann and Leigh,
I am so sorry to learn of Rick’s death and this great loss in your life — and truly, in the lives of everyone around him. I remember him as someone who knew just the right thing to say, and was unabashed (in a good way!) about sharing it. He could make you smile, touch your heart, and make you stop and consider all at once. Praying for you in this time of grieving.