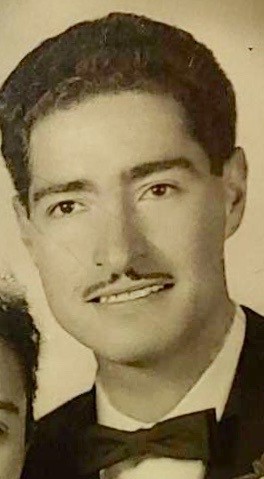 Ricardo Miguel Campero, 91, of Knoxville, Iowa, passed away on September 11, 2020, in Maryland.  He was born September 29, 1928, in Potosi, Bolivia, and was the son of the late Juan Campero and Antonia (Romero) Campero.  His family later moved to La Paz, Bolivia, where he grew up.  As a young adult, in 1957, Ricardo immigrated to America to follow his sweetheart from Bolivia, Nelly Richards, who had previously come to America to study nursing.  They married on January 25, 1958, and lived and worked in New Jersey and New York City.  He was very proud of his United States citizenship.  Shortly after their children were born, they decided to move to Knoxville, Iowa, to raise their family in a quieter, small town setting.  Ricardo was an Accountant, working many years for Des Moines Steel Company, Contel Telephone and finished his career at the 3M company in Knoxville, Iowa.

In retirement, Ricardo and Nelly spent their time working as Walmart greeters, volunteering at Head Start children’s program, and spending time in Maryland with his beloved grandchildren.  Ricardo loved drawing, painting, playing games, dancing, enjoying music and learning to play the guitar late into his 80’s.  Ricardo was well known in his adopted Iowa community and was very active in Church, Kiwanis, the local library, the local Senior Center, Knoxville High School sports team events and many fellowship groups.  Ricardo was a faithful servant of Christ and was a member of St. Anthony’s Church in Knoxville, Iowa and also attended the Church of Christ in Knoxville.

In late 2019, Nelly and Ricardo moved from Iowa to be with their daughter Mary and her family in Owings.  They enjoyed spending time at the North Beach Senior Center and taking walks with family.

Ricardo was very proud of his Bolivian (Inca) heritage and could often be found dancing to Bolivian music at home and at social events with the love of his life, who he called “Nellicita” or “Mi Vida,” which in English translates to “My Life!”  Ricardo was always known as a gentleman and a gentle man.  He was a one-of-a-kind personality and loved food, family, friends, and fellowship.  He was the epitome of the “American Dream.”

Ricardo is survived by his wife, Nelly (Richards) Campero; his son, Michael John Campero and his wife, Barbara, of Iowa City, Iowa; daughter, Mary (Campero) Berkley and her husband Bruce Berkley, of Owings, Maryland, and his 3 beloved grandchildren, Gabriela (Gabi) Berkley; Grant Berkley; and Katie Berkley also of Owings.  He is also survived by his brother, Carlos Campero of La Paz, Bolivia.  He was preceded in death by his parents and siblings Freddy, Nelly Abaroa, Jorge and Emilio Campero.

Although Ricardo will be missed by his family and many friends, his wife, Nelly, has been comforted by the outpouring of kindness to her during this difficult time.  Ricardo was the pillar of our family and will be greatly missed.

The service for Ricardo will be live streamed on the Rausch Funeral Home Facebook Page starting at 2:55 PM. The service will start at 3:00 PM and can be viewed by using the following link. https://www.facebook.com/RauschFH

So sorry to hear this. He and Nellie were great neighbors in Knoxville.

Mary and family: with sadness and a broken heart I give you my deepest condolences. Grandpa Ricardo was a funny and great man with many talents. He will be missed for sure. Praying for you and your family ❤️

Nelly, So sorry to hear of Ricardo’s passing. He was an humble Christian man who had a heart and love for others, and his smile was so special. We are praying God will comfort you and your family in the difficult days ahead.

My heartfelt condolences to you and your family . We always loved your company in Knoxville Iowa.
May God the Almighty give you strength and patience to bear this loss.
My prayers are always for you.

So sorry to hear of Ricardo’s passing. He was truly a gentle man, devoted to our church, and just a joy to be around in our community here in Knoxville. Blessings to Nelly… we miss you!

So sorry to hear of Ricardo’s passing. I miss you both and send my prayers for you! God bless!

Nelly and family,
We are so sorry to hear of Ricardo’s passing. Met him years ago when we were in the same car pool to work in Des Moines. It was always a pleasure to run into you both when shopping in Knoxville. Always great smiles and conversation. God bless your family. Marilynn and Bernie Avitt

My sympathies to you all. Ricardo was such a lovely person. Connie Lenger

I’m saddened to learn of Ricardo’s passing. He was a very sweet, kind, gentle man; I’m blessed to have known him. He was always so friendly and kind and loving.

May God surround you with His felt comforting presence during this time and in the difficult days ahead.

Sending much love, hugs, and prayers from Knoxville.

My condolences to this nice family

Dearest Nellie and family,
Our deepest condolences. Know that you both have a special place in our hearts and the heart of our St Anthony church family. Always a smile on Ricardo’s face, Heaven truly has gained an angel.

To Nelly and the Berkley Family-
Thank you for allowing us to spend time with Ricardo over the past several years. Our memories will be of watching Nelly and Ricardo sitting together in the big chair (both in and out of sleep), hand in hand, while the ball dropped to usher in a New Year; of seeing them dance together; of hearing the stories of Ricardo chasing Nelly relentlessly all the way to America; and, of trying to decipher just what Ricardo was trying to draw during some very entertaining family game nights! The world needs more people like Ricardo: tender-hearted, humble, thoughtful, and encouraging. He was such a blessing to our whole family and this upcoming September 29th when we celebrate our youngest daughter’s 16th birthday, we’ll cut an extra piece of lemon cake in honor of his 92nd! We know that God is providing the comfort and peace only He can give! We love you all and will continue to lift you up in prayer.
John, Ramona, Gabriella, Natalie, and Melody

Nelly and family … We send our sincere condolences to you all in honor of Richardo. We have had a heavy heart since hearing the news of his passing. Hap really enjoyed working with him at 3M — he was a wonderful man. Mary so much enjoyed knowing both of you from church and running into you around town. You both were always eager to ask about Hap and I and our family, how we were doing and what was new for us. We really enjoyed our short spontaneous meetings and conversations. Blessings to all of you. Thanks for sharing his greatness with us. We will miss his kindness and beaming smile.

Our hearts go out to dear Nelly and family at this time. I had the great pleasure of knowing this wonderful man throughout most of my life. He and Nelly were the best neighbors in my adult life as well. Our dearest sympathies and love to Nelly, Mary, Michael and family. Sincerely, Cara and Grace Irving

Hugs to Nelly and her family. I met them when I was a nurse for HeadStart and worked with Nelly. Such an adoring couple and loving friend. Blessings.
Toni

Dear Nelly and Mary, and family,
My deepest sympathies, Ricardo truly set a great example for how to live life with grace and gentleness, and definitely to the fullest! I know he will be greatly missed by all who knew him.
I pray you find peace and comfort in your many wonderful memories.
Sincerely,

Our hearts and prayers go out to Nelly and family. Ricardo was the sweetest friend and former coworker. He would always search me out at an event, as I would him. We always embraced and visited whenever we saw each other. I’ve missed him since he moved from Knoxville. Nelly, our prayers are for Peace and Comfort for you and your family. Love, Jerri & Al

Very sorry to hear this. Our condolences from the Holdefer family in Knoxville.

I’m so sorry to hear of Ricardo’s passing. He was a wonderful man, spreading joy and happiness wherever he went. My sincere sympathy is with Nellie and the family.

Our deepest condolences to Nelly, Mary and the Berkley family on Ricardo’s passing from this earth to his heavenly home. May God bless and comfort all who mourn him and will miss him until they are reunited with him once again in Eternity. Our love and prayers are with you.
Pam, Jordan and Ceara Laughlin,
Jamie, Mark and Brinley Boknecht

So sorry to hear the sad news. We will always remember Ricardo and Nelly dancing, his warm smiles, and curiosity. Hugs to Nelly and the family.

Nelly and family- It was a pleasure to live by you for many years. Our children Jacob and Claire always loved getting to talk with you and Ricardo. He will be missed. Prayers and blessings to you at this time. Bryan and Kim Avitt, Jacob and Claire

Dearest Nelly, Mary and family. We are so saddened by the death of Ricardo, our deepest condolences to everyone of you. Ricardo was a blessing to all who knew him, he was so friendly and kind, always smiling. Every time we spoke on the phone he always ended his conversations by saying “bendiciones Adelita, te queremos mucho”. Heaven has gained another angel. The consolation is that death is not the end, it is only a passing – like going through a door to somewhere new; and having those you loved, patiently waiting on the other side, ready to greet you and welcome you. The people that we love are intertwined in the fabric of our lives even beyond death. May Good grant you the peace that passes all understanding until you meet your beloved Ricardo again.
Adela Leon and family
https://www.youtube.com/watch?v=UNg2IWj0pko

Dearest Nellie,
You and Ricardo were always a bright light in Lisa and my life. Many prayers and love to you at this time. Lori

We are so sorry to hear of the loss of Ricardo. Our condolences to Nellie and the family. He will be greatly missed.

Nelly, Mike and Mary I am so sorry for loss of Ricardo. He was such a kind and good man, husband and father and neighbor. My heart breaks for you.
He was surely a fighter in the last few years.
All my love to you all and may Ricardo rest in peace until you all meet again.

Condolences to the Campero family. Nelly, you and my mom, Mert Hollingsworth, worked together many years at the V.A. Hospital. You were mom’s favorite nurse to work with and our family always had a great respect for you and Ricardo.

When we moved into our home, Ricardo was the first person to approach me and welcome me to the neighborhood. He was never without a smile and was so kind and gentle. He will truly be missed.