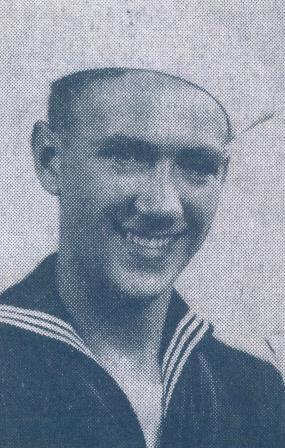 Rene Clifford Couleman Sr., Lusby Md, affectionately called “Cuckoo” by those who loved him, passed away on March 11, 2016 at age 90. Rene was preceded in death by his sister Yvette Flanagan of Fairfax, VA, his son Rene C. Couleman, Jr., and his wife and mother of his five children, Nancy M. Couleman. At the time of his death Rene was married to Blanche Carrington Couleman of Bradenton, Florida.
Rene was born to Ray Howard Couleman and Cesarine Lorenzetti Couleman in Grand Forks, North Dakota, and was raised in Arlington, Virginia. At age 17, upon graduation from St. John’s College High School in Washington, D.C., he proudly enlisted and served in the U.S. Navy. He was initially on a destroyer in the South Pacific during World War II until he was selected to join the staff of Admiral William F. “Bull” Halsey, Jr., and became a radioman (RM3) on the USS New Jersey (BB62). It was there his job was to decode and report the weather. During that time, he experienced nine kamikaze attacks and multiple battles at sea.
Following the war, Rene served as a motorcycle police officer with the Arlington County Police Department, and later worked with the Arlington County School Board as a supervisor in the Department of Transportation. Later, as a self taught and talented builder, he obtained his Maryland Home Improvement and Construction License and remains well known throughout southern Maryland for anything from minor repairs to the construction of additions and homes including the home of his daughter, Nan, in Lusby.
Rene was a very active member of the United States Coast Guard Auxiliary and took part in many emergency calls from boats in the Chesapeake Bay and Patuxent and Potomac Rivers around southern MD. He earned his Captain’s License and was also an active member of the Coast Guard Auxiliary while living in the Gulf Coast area of Florida. He is a Past Commodore and lifetime member of the Solomon’s Island Yacht Club in Maryland.
On April 16, 2016, at 1:00 pm, a memorial mass will be held at the Saint John’s Catholic Church, Hollywood, Maryland.
Rene is survived by four of his five children Toni Coleman (Michael) of Norfolk, Virginia, Alice Owens (Ralph) of St. Mary’s City, Maryland, Ray Couleman (Terri) of Norman, OK, and Nancy R. Couleman of Lusby, Maryland. Rene is survived by 11 beautiful grandchildren, 20 great grandchildren, and one great-great grandchild.