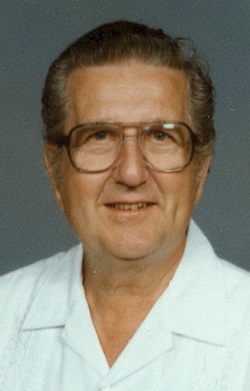 Reginald C. Drew, 90, of Breezy Point, MD passed away peacefully on August 27, 2014 at the Mandrin Inpatient Care Center in Harwood. He was born June 17, 1924 to Lester and Ruth Drew Cook, and adopted by uncle Roscoe and his wife Mary Drew. He had a very happy childhood and with his jet black curly hair and dimples, he was adored by all the ladies. He had an older brother, Victor Cook (deceased), and a half-sister Margaret Poland Burlile Estep. He graduated valedictorian from Columbian High School, where he was an All-State football player and wrestler. He entered the Merchant Marine in 1943 and served during World War II until 1947. He married Esther E. Shafer and they had three children. His occupation as a sales engineer in the HVAC industry took him and his family to various residences in five states: Ohio, Illinois, Georgia, Virginia, and Maryland. He was a past president of the Prince Frederick Rotary Club and a strong supporter of the ACCA. He retired to Florida for twenty years. He spent his last years living with his son Tom in Breezy Point. He loved sailing, fishing, family, woodworking, the Redskins, and homemade cherry pie.

He was preceded in death by his wife, Esther and a son Michael Drew. He is survived by a daughter Judy Merriman of Mt. Airy, MD, and John “Tom” Drew of Breezy Point, MD, eight grandchildren, nine great-grandchildren, and many nieces and nephews.