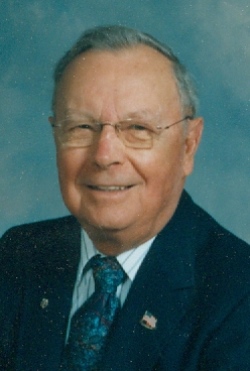 Raymond Gibson Trott, 89, of Huntingtown, Maryland, died peacefully September 17, 2013 at Charlotte Hall Veterans Home. Raymond was born on October 25, 1923 in the Trott family farm house in Huntingtown, Maryland. He was preceded in death by his mother, Edna Priscilla (Gibson) Trott, his father, Allen Gordon Trott (both of Huntingtown), and by an older brother, Edgar Allen Trott, a career U.S. Army officer, of Edgewater, MD. He was married to the late Thelma Jones (Buckler) Trott for nearly 46 years before she passed away in April, 1989. In June 1991, Raymond married Donna (Yommer) McDonald Trott.
Raymond graduated from Calvert County High School in 1940. After graduation, he attended technical training school in Baltimore, Maryland, where he was introduced to electronics and general radio technology, training which would be the cornerstone on which Raymond would build his later career. In August 1943, he was inducted into the United States Army and sent to Riverside, California, to attend Radio Technician School prior to deployment to the war zone. Before Raymond was sent overseas, World War II, in both the Atlantic and the Pacific, would end. On February 5, 1946, he received an Honorable Discharge from the U.S. Army in the rank of Technician Fifth Grade (Technical Corporal). He was awarded the American Campaign Medal, the World War II Victory Medal, as well as a Good Conduct Medal for his service to the United States during WWII.
Upon discharge from the Army, Raymond returned to Calvert County where he pursued a career as an electrician. Subsequent to earning a State of Maryland Master Electricians license he was employed by the U.S. Navy at the U. S. Mine Warfare Test Station in Solomons Island, Maryland. He was later appointed to a position as an Engineering Technician at the Naval Research Laboratory, Chesapeake Bay Detachment, Chesapeake Beach, Maryland, where he subsequently would be promoted to the position of Facilities Manager of the Chesapeake Bay Detachment. He continued in that position until he retired on June 3, 1983 after 42 years of combined service in the Department of the Navy and the U.S. Army. Like most farmers or farmers’ sons, Raymond felt a need to be engaged continuously in worthwhile activities and so did not remain idle for long. In 1985 he went to work for the Calvert County Government as an Electrical Inspector in the Department of Inspections and Permits. In June 1995, following ten years of service with Calvert County, now nearly 72 years of age, Raymond again decided to retire. This time permanently.
Raymond Trott was one of those genuine people that come along only infrequently. Those who knew him respected him for his honesty, his integrity and his service to others. He lived by the personal credo that he had a responsibility to help others whenever he could. He would abide by that philosophy all of his life. He served as President of the Huntingtown Volunteer Fire Department from 1974 to 1976; and he was an EMT as well, only stopping this latter involvement as he grew older and came to realize that “running on the ambulance” was something that should be left to “the younger volunteers.” He was a life-long member of the Huntingtown United Methodist Church where he served on various church committees and was involved in many projects over the years.
Raymond’s service to community extended to outreach organizations such as the Prince Frederick Masonic Lodge No. 142, A.F & A.M. where he was a member for over sixty years, and where he served as Worshipful Master in 1962. He also was a member of the Order of the Eastern Star for over sixty years where he was a Past Patron of Prince Frederick Chapter No. 104, and Unity Chapter No. 112. He was also a Past Grand Patron (1999-2000) of the Grand Chapter of Maryland, Order of the Eastern Star and was appointed to the Membership Committee by the General Grand Chapter (International) of the Order of the Eastern Star (2003-2006). He was a member of Boumi Temple A.A.O.N.M.S., Baltimore, Maryland, Scottish Rite Valley of Baltimore and Valley of Southern Maryland, Pa-Po-Peake Shrine Club of Southern Maryland, Past Masters of Southern Maryland, National Sojourners, Old Dominion Chapter #364, Alexandria, VA and Heroes’ of ’76.
Raymond would lead an active life until he became ill. He and his wife, Donna, loved to travel by air, land, or sea (especially cruising). They traveled far and wide: from Australia to Alaska and many places in between, including spending summer and fall days at the beach in Ocean City, Maryland. Raymond loved baseball generally: he coached the Huntingtown Babe Ruth team for several years in the early 1970s. He also had a special interest in the old Washington Senators. He also was a long-time season-ticket holder and ardent fan of his favorite football team, The Washington Redskins. He loved the outdoors, and in the spring and summer would sit outside his home in Huntingtown, listening to the sounds of birds at play and catching a glimpse of a deer or two passing close by.
Raymond is survived by his wife, Donna McDonald Trott, of 22 years; sons: Robert Allen Trott and his wife, Theresa, and David Arthur Trott and his wife, Colleen, both of Huntingtown; daughter, Brenda Elaine (Trott) Allen and her husband, Peter, of Palmyra, VA; Step-Daughter, Cheryl Ann (Cook) Simms and her husband, Mark, of Huntingtown; 8 grandchildren; 10 great grandchildren; and 3 great-great grandchildren.