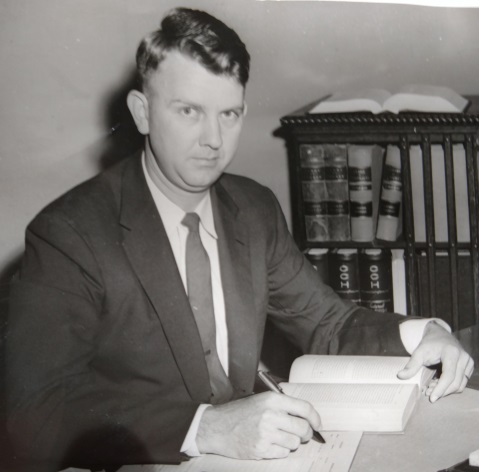 Perry Gray Bowen, Jr., age 90, retired judge of the Circuit Court in Calvert County, died on March 9, 2018, at Spotsylvania Medical Center in Fredericksburg, Virginia. Judge Bowen was born at home on Warren Avenue in Baltimore, Maryland, on November 27, 1927, to Melba Hutchins Bowen and Perry G. Bowen, Sr., and moved with his family to a farm at Sheridan Point on the Patuxent River at age one. He grew up fishing, crabbing, trapping and hunting on the Patuxent River and working on the family farm raising tobacco, wheat and corn.
Following high school in Calvert County, Judge Bowen completed his undergraduate studies at the University of Maryland in College Park and received his law degree from the University of Maryland School of Law in Baltimore. He enlisted in the United States Army and served four years in the Judge Advocate General Corps. While on assignment in Columbia, South Carolina, he was introduced to Virginia Elizabeth Woodruff by his commanding officer. The two married on November 24, 1951, at Trinity Cathedral in Columbia. After spending their newlywed years in the military, the young couple returned to Calvert County, living first in Dares Beach and then in Scientist’s Cliffs. After welcoming three daughters and a son, the couple built a home on the farm where Judge Bowen had been raised and which he continued to farm.
Admitted to the bar in Maryland, Judge Bowen pursued a general law practice in Prince Frederick and particularly enjoyed trial work. At age thirty-six, he was appointed an associate judge of the Seventh Judicial Circuit in Calvert County; he served on the bench for twenty-three years. Among many projects, he oversaw the expansion of the Circuit Court House in Prince Frederick and the modernization of the local detention center.
Dedicated to his community, Judge Bowen was the founding president of the board of The Calverton School. He also served as the chairman of the construction committee for Trinity United Methodist Church and was a founding board member of Calvert Bank & Trust Company. He also served on the board of Calvert Memorial Hospital. A life-long member of the Calvert County Historical Society, he was instrumental in the founding of the Calvert Marine Museum and Jefferson Patterson Park.
Although Judge Bowen’s vocation was the law, his avocation was the land. He enjoyed farming with his son Perry, III, on the family farm in Calvert County and later at Oakenbrow in King George County, Virginia. Never happier than on a combine in a wheat field, he harvested his last crop of wheat at Oakenbrow in the summer of 2013. He remained active in the farming operation through last year.
A gifted story-teller and lover of poetry and history, Judge Bowen could recite the works of his favorite poets from memory. A staunch believer in a good breakfast, he was an accomplished cook and host.
Judge Bowen is survived by his wife of sixty-six years, Virginia Woodruff Bowen; his daughter M. Elizabeth (Beth) Bowen and her husband Wilbur W. Bolton of Bel Air, Maryland; his daughter Sara Gray Bowen of Prince Frederick, Maryland; his son Perry Gray Bowen, III of King George, Virginia; his grandchildren Eleanor Bowen Nixon and her husband John Nixon, Emma Virginia Morse Bolton and William Warner Bolton; and great-granddaughters Alina and Anaya Ortiz and Finley Gray Nixon. He was preceded in death by his daughter Virginia Woodruff Bowen (Ginger), by his granddaughter Maron Elizabeth Bolton, by his parents, and by his brother Lowell Reed Bowen of Baltimore.
A celebration of his life will take place at 11:00 A.M. on Thursday, March 15, 2018, at Trinity United Methodist Church, followed by interment at St. Paul’s Episcopal Church cemetary, both in Prince Frederick. Friends may call in the gathering room at Trinity United Methodist Church from 6:00 to 9:00 P.M. on Wednesday, March 14, 2018.
In lieu of flowers, those who wish to make a memorial may consider a gift to the The Calverton School, to the St. Labre Indian School, or to the charity of the giver’s choice.