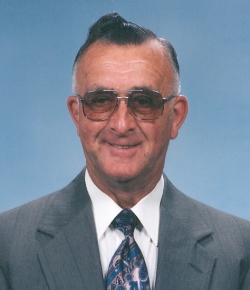 Perry Edward Simmons, 82, of Lothian, MD passed away October 1, 2012 at Genesis Health Care in Severna Park, MD. He was born October 8, 1929 in Charleston, WV to Perry and Jodie (Froncelli) Simmons. Perry was raised in Monterey, VA where he attended public schools. He enlisted in the United States Army August 31, 1951 and was honorable discharged from active duty August 3, 1953 and from the Reserves August 30, 1959, having earned the Germany Occupation Medal. Perry married Mary V. McCray on October 16, 1954, and they lived in McDowell, Fairfax and Manassas, VA. Perry was employed as a mobile home park manager in Virginia, and in 1965 Perry and Mary moved to Wayson’s Mobile Home Park in Lothian, where he was also the park manager, retiring in 2005. He was a faithful member of Melwood Church of the Nazarene. Perry loved his work and enjoyed spending time with his family, especially his grandchildren and the family dog Toby.

Perry was preceded in death by his parents. He is survived by his wife Mary and daughters Robin G. Willis of Chesapeake Beach and Debra L. Garrett and husband Chip of Dunkirk. Also surviving are grandchildren Dale Witt, Michelle Wayson, Jason Witt, Kelly Williams and Kristin Garrett; great grandchildren Haley and Blake Witt, Mason Williams and Isabelle Wayson, and a brother Joseph Simmons of Monterey, VA.