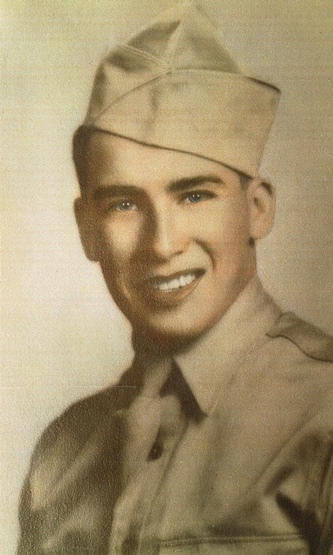 Paul “Petie” Warren Greenwell, Sr. of Lothian passed from this world at age 95 on Monday, March 6, 2017. Paul had a lifelong dedication to his Church, country, and family. He leaves behind his loving wife Frances to whom he was dedicated for 68 years, his son Paul Jr. and his wife Kelly of Fort Worth, Texas, his granddaughter Kate, her husband Brian Donnelly, and his great grandson Brendan Paul, all of Los Angeles, California. Although he passed away within a few miles of his birthplace, his experiences and travels allowed his life’s journey to leave the world a better place. Born at home in Lothian during the Knickerbocker Blizzard on January 8, 1922, he was a graduate of Southern High School at age 16. He worked on construction of the Pentagon before entering World War II with the 12th Armored Division Hellcats, 66th Armored Infantry Regiment, Company C, rising to the rank of Sergeant. He saw combat action at Herrlisheim (France) where 1700 of his Division were killed, fought at the Battle of the Bulge, and helped liberate several concentration camps. He was seriously wounded and awarded the Purple Heart in addition to numerous other commendations for outstanding courage and bravery in battle. Upon his return to civilian life, Paul worked at the Census Bureau, where in 1951 he was instrumental in the development of the first commercial computer in the United States, receiving various merit awards for his work and retired after thirty years. Paul’s passion for fishing, gardening, playing cards, and enjoying steamed crabs were only exceeded by his love of his beagles and hunting, training many dogs into regional field trial champions. We are confident he was greeted in heaven by his loving family members, his fallen friends from World War II who did not get to live out their dreams on this earth, and his nearly hundred beagles he owned over the years. He was also a passionate follower of the Orioles, Colts, and Ravens.

Paul is preceded in death by his parents, John Turner and Alice Flynn Greenwell of Lothian and all his siblings Thomas, Alice Marie, Charles (Buddy), Helen, and Bobby. He was heavily influenced in his religious life by his grandfather John Flynn and was a devoted follower of the Catholic Church. He leaves behind 22 nieces and nephews. He will be buried near his parents and grandparents at Our Lady of Sorrows Catholic Church where he was a long time member and received all the blessings of the Church.