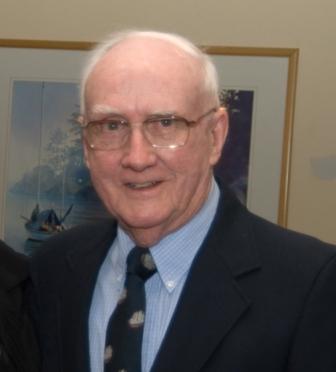 Paul L. Berry was born in San Jose, CA September 4, 1921, the only son of Elmer G. and Nellie B. Berry. By 1932 the family moved from California to Montgomery County, Maryland with relatives where they remained until Paul’s father was killed in an auto accident in 1934. Following this he and his mother moved from Maryland to Washington, D.C. where they lived for a number of years. During this time Paul graduated from Woodrow Wilson High School in 1939 and American University in 1943. While at AU he met fellow student Doris Patterson whom he married in 1945. That same year, Paul joined the staff of the Library of Congress where he remained in service until he retired in January, 1980. During his tenure there, he advanced in various positions of increasing responsibility in the area of public reference. In the 1980s Paul was also on the Board of Trustees of American University and Board Secretary for several years.

In 1981, Paul and Doris built a house on Battle Creek in Calvert County, MD. During this period they enjoyed traveling and took many trips to Italy, Mexico, and Great Britain. In October 1996, they moved to Asbury Solomons Island.

In 1982 Paul began his service as the volunteer librarian at the Calvert Marine Museum where he served for over 30 years and accumulated almost 27,000 volunteer hours. In recognition of his remarkable service and contribution to the museum, the library was renamed in his honor in 2007: the Paul. L. Berry Reference Library. He is also the only volunteer to receive his own telephone extension, parking space, and mailbox – recognition of his place as a respected member of the staff. In 1984 he assumed editorship of the museum’s newsletter, the Bugeye Times, creating such a high standard that it won numerous publication awards over the years. Paul also served on the museum’s Board of Governors from 1984 to 1990, and served as president of the board for four of those years. During this period he was also active in volunteer service in the Calvert County Historic District Commission.

In 1991 Paul joined the Board of Directors of the American Chestnut Land Trust where he served with the utmost integrity and sense of responsibility for over 20 years. Paul’s leadership skills were immediately recognized with his election as board secretary in 1992 and as treasurer from 1996 to 2013. As treasurer, Paul became a beloved volunteer member of the staff, spending hours in the office on a weekly basis overseeing the accurate recording of the trust’s financial records. He served on various committees throughout his tenure on the board and as the unofficial historian of the land trust. In 2005, Paul was awarded the American Chestnut Land Trust’s Presidents’ Award for his outstanding efforts in pursuit of the conservation of the natural and cultural resources of Calvert County, Maryland.

Paul is survived by Doris, his wife of 68 years, his daughter Marsha J. Berry of St. Paul, MN, his son Don L. Berry, wife Cassie Bosley and her two sons Morgan and Severn, of Shepherdstown, WVA.