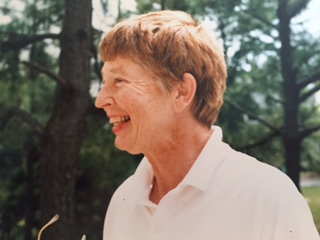 Patricia Ann “Pat” Meagher, 89, of Lusby, Maryland passed away August 15, 2017 in Prince Frederick, Maryland. She was born on September 30, 1927 in Washington DC to the late Christian and Helen Lanigan Wohlgemuth.
Pat was a long time and active resident of Calvert County where she was a founding administrator and teacher at the Calverton School in Prince Fredrick, Maryland. After retiring from the Calverton School, she taught classes at St. Mary’s College of Maryland, was active in her community as a Red Cross Volunteer and was an avid tennis player. Pat took great interest in farmland and historic preservation in Calvert County and lived on one Calvert’s oldest farms, Morgan Hill Farm, which dates to the 17th century. Pat grew up in Chevy Chase, Maryland where she graduated from Georgetown Visitation in 1945 and was a 1949 graduate of Manhattanville College, then a prestigious women’s college in New York City. She also received a Master’s in Education from Catholic University. Pat lived in post-war Scotland with her late husband, John Meagher, where she shared her musical talents by playing the accordion and piano for hospitalized American soldiers.
In her later years, Pat continued to entertain friends, play the piano and tend to her beloved Morgan Hill Farm. She never met a dog she didn’t like, enjoyed nature, astronomy and a good laugh with friends. Pat often remarked to those close to her that she wanted her obituary to say that she, in fact, had all 32 teeth. Pat was the last surviving member of her family but leaves old and dear friends who loved and cared for her, especially Molly Nalls, her “adopted niece” along with the Nalls, Murray, and Watson families.
Pat is preceded in death by her husband, John Meagher, sisters Joan Wohlgemuth, and Mary Jane Ogden and brother in law Patrick Ogden.