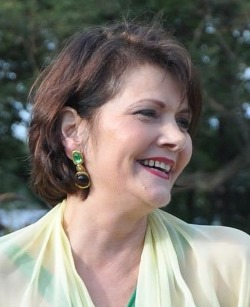 Nancy Elizabeth McCraw Mroczek, age 56, passed away at her home in Shady Side, Maryland, on 28 March 2015. Born in 1959 to Lloyd G. and Cosette B. McCraw in Norman, Oklahoma, she graduated from Norman High School in 1977. Nancy worked in Norman in retail until 1979 when the U.S. Navy recruited her to train as a Cryptologic Technician. She specialized in missile systems telemetry analysis and served in Rota, Spain, and the Office of Naval Intelligence in Suitland, Maryland. Upon her honorable discharge from the Navy in May 1985, the U.S. Federal Civil Service recruited her to the Naval Technical Intelligence Center where she worked from May 1985 to June 1991.
Nancy’s career in retail management on the east coast began with Hecht’s Department Store in Annapolis as a cosmetics counter manager. Nordstrom, Inc. recruited her in July 1994 to manage Christian Dior cosmetics at the Nordstrom store in Annapolis, Maryland. Nancy rose through Nordstrom’s ranks to become a merchandise buyer and a regional merchandiser. She worked with Nordstrom for over 15 years until Clarins-USA recruited her in 2009 as an account executive for the Washington, D.C. area.
She is survived by her husband of 27 years, Mark Mroczek, their daughters Joseline and Katherine, and son-in-law Evann Magee. Nancy’s five brothers and sisters also survive her: Greg McCraw of Cypress, Texas; Mark McCraw of Norman, Oklahoma; John McCraw of Antlers, Oklahoma; Lynne McCraw Schall of Wichita, Kansas; and Kathryn McCraw Regenscheid of Faribault, Minnesota, as well as many cousins, nieces, and nephews.

At the request of daughters Joseline and Katherine, traditional funeral attire (black) is optional.