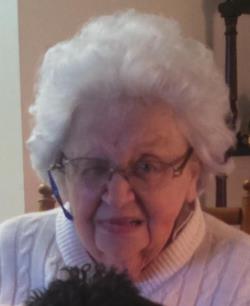 Nancy Marilyn Bevard, 84, of North Beach, formerly of Owings, passed away June 7, 2015 at her home. She was born January 5, 1931 in Baltimore to Calvin Saunders and Ruth Luella (Gelbach) Grobaker. Nancy was raised and educated in Catonsville, graduating in 1947. Nancy graduated from the University of Maryland College Park in 1951 with a degree in journalism. She was employed with US Marine Insurance Corporation, and later as a bookkeeper for Silver Hill Sand Gravel & Concrete Company in Silver Hill, MD. She married Samuel S. Bevard, Jr., and that marriage later ended in divorce. She then received her realtor license and owned and operated GBA Property Management Company, Inc. in Columbia, MD. She moved to Owings in 2009. Nancy was a member and past president of Southgate Ladies Lions Club, Past Worthy Matron of the Eastern Star Camp Springs Unity Chapter 112, and also a member of the Red Hat Society and Mt. Harmony United Methodist Church. She enjoyed gardening, and collecting coins and seashells.