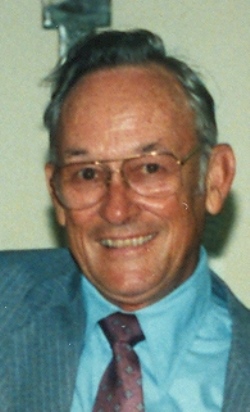 Morris Ambrose Loveless, 86, of Hyattsville passed away January 16, 2014 at Prince George’s Hospital in Cheverly. He was born December 29, 1927 in Washington, D.C. to Bernard and Ethel (Griffith) Loveless. Morris was raised in North Beach and graduated from Calvert High School. He entered the U.S. Navy on March 25, 1946 and was honorably discharged as a Seaman 2nd Class on January 22, 1948, earning the World War II Victory Medal. Morris married Mildred Jean Schmidt on June 3, 1950 and they made their home in Hyattsville. He was employed as a brakeman on the railroad in Washington, D.C. for twenty years, and was later a Stationary Engineer with the U.S. Government Printing Office, retiring in 1987. Morris was a member of the American Legion Post 108 in Cheverly, the Fleet Reserve in Annapolis, and St. Bernard’s Parish in Riverdale. In his leisure time, he enjoyed fishing, stained glass, civil war history, Sudoku puzzles and watching sports.

Morris was preceded in death by his parents, a grandson Kenneth White, brothers Bernard, Jr. and Joseph Loveless and his wife, Jean, who passed away May 22, 2013. He is survived by children Morris A. Loveless, Jr. and wife Naty of GA, Karen L. White and husband Jimmy of Grasonville, John K. Loveless of Prince Frederick, Cheryl Lulli and husband Juan of Bethesda and Michael H. Loveless of Hyattsville. Also surviving are grandchildren Catherine Canter and husband Damon of AZ, Kimberly Kauffman and husband Todd of Huntingtown, Joseph Loveless of GA, Brandon White and wife Debbie of Annapolis, Kevin Loveless of FL, Nicolas Lulli of NY, Cecelia Lulli of NJ and Daniel and Alexander Lulli of Bethesda; great-grandchildren, Gabriela, Draven and Donovan Canter, Baileigh and Billy Kauffman and Nathan White, and a sister Audrey Mae MacWilliams of Deale.