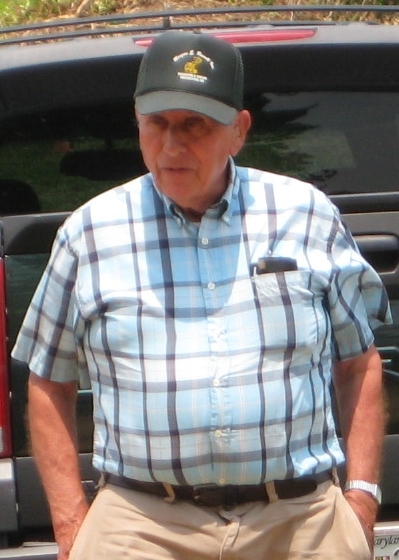 Morgan Elmer Russell, 84, of St. Leonard, passed away April 9, 2016 at Washington Hospital Center. He was born March 25, 1932 in Sunderland to Wilson and Marguerite (Booze) Russell. Morgan was raised in Calvert County and graduated from Calvert County High School in 1949. He served in the United States Marine Corps during the Korean War from 1951 to 1959. He met the love of his life, Charlotte Ann (Horsmon) Russell while ice skating in Calvert County where they married in 1956 in Prince Frederick. Morgan was a business owner in the county and started Morgan E. Russell Inc, an excavating and hauling company in 1960. He constructed many commercial and residential farm ponds as well as many other establishments throughout the county. He was a member of Future Farmers of America and an honorary member of Huntingtown Volunteer Fire Department. In his leisure time he enjoyed the outdoors, animals, crabbing, fishing, and boating. He also enjoyed spending time with his family, especially his granddaughter Jessa.

He was preceded in death by his wife Charlotte Ann Russell on December 30, 2014, his parents, and sisters Alma May (Russell) Turner and Marguerite Russell. He is survived by son Gregory Morgan Russell and his wife Tracie of Huntingtown; granddaughter Jessa Ann May Russell of Huntingtown. He is also survived by a brother Wilson Russell of Rivesville, WV as well as numerous nieces and nephews.