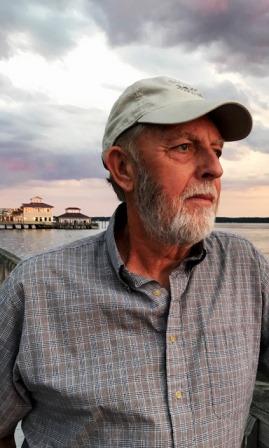 Mordecai Morgan Bowen Jr. passed away peacefully in his sleep surrounded by family in his home in Lusby, Maryland on June 13, the day after his 8th wedding anniversary. Mordecai lost his battle with prostate cancer, which had spread to his bones. He was born to Mordecai “Morgan” and “Tina” Bowen in Prince Frederick in 1947. He was the oldest of ten siblings. He grew up in Cove Point, MD and also lived in Lusby, MD. He joined the Calvert County Sheriff’s Department in 1971, graduated from the police academy, and worked as a lieutenant. While in law enforcement, he began excavating part-time. When he left the sheriff’s department, he dedicated his focus completely to M.M Bowen Excavating before moving to Tennessee in 2006. He moved back to Maryland in 2010 for love and married Deborah Bowen that summer.
Mordecai’s huge heart that beat behind plaid shirts led to passionately loyal friendships that lasted a lifetime. When not cruising on his Harley, Mordecai could be found reminiscing on his front porch, helping out a friend, or working in his shop on his multiple passions.
He is survived by his wife, Debbie, and his stepchildren Jeffrey Lewis and wife Autumn Phillips-Lewis of Lusby and Melissa Tully and husband Matthew of Baltimore and granddaughter Kyla Tully. He is also survived by his loving siblings and their families: Shirley Hubbard of Willis, Virginia and her children Charles and wife Julie, Glinda Stanley husband Jeff, and Amanda Farmer and husband Jason; Darlene Zinn and husband Thomas of Lusby, MD and their daughter Toni; Karl Bowen of Solomons, MD and his children Nichole, Joshua and wife Megan Lewis-Bowen, Nicholas and wife Sierra, brother-in-law Howard Pouncy and wife Patricia and their children Karen Sharpe and husband Michael, Sheila Gearhart and husband Brad, James and wife Allison and Sarah Candido and husband Joe; Karin Griffin and husband Mark of Lusby and their children Holly Tran and husband Denny, and Amy Griffin; Helen Griffin and husband Tim of Lusby and their children Billy and wife Bridgett, John and wife Sara, and Jessica Reynolds and husband Russ; Cindy O’Connell and husband Gary of Lusby; Lisa Keeley and husband Billy of Broomes Island and children Billy, Ian and Cooper; and Bruce Bowen of Lusby. He was predeceased by his parents, sister Gail Pouncey and nephew Jay Zinn.