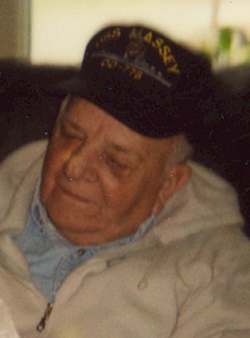 Milton Albert “Reds” Robertson, Sr., 84, of North Beach passed away April 30, 2014 at the Burnett-Calvert Hospice House in Prince Frederick. He was born August 17, 1929 in Washington, D.C. to Edward G. and Anna Marie (Crowe) Robertson. Milton was raised in Chesapeake Beach and attended Beach Elementary and Calvert High School, graduating in 1948. He also attended the University of Maryland for two years. He enlisted in the United States Navy on August 9, 1950 and served in Korea on the USS Massey, earning the National Defense and Navy Occupation Service Medals. He was honorably discharged on June 14, 1954 as a Machinist Mate 2nd Class. Milton worked for John Driggs Construction of Capitol Heights as a heavy construction estimator, retiring in 1993. He married Barbara Shipman, and they later divorced. Milton was a member of the Prince Frederick Masonic Lodge 1542, where he was a past Master and the Stallings-Williams American Legion Post 206 in Chesapeake Beach. In his leisure time, he enjoyed fishing and hunting.

Milton was preceded in death by his parents, four siblings, his companion, Evelyn Schwab, and a son Mark Daniel Robertson. He is survived by sons Milton A. Robertson, Jr. of Chesapeake Beach, Mitchell A. Robertson of North Beach, and Matthew A. Robertson and wife Charlene of California. Also surviving are five granddaughters and three great-granddaughters.