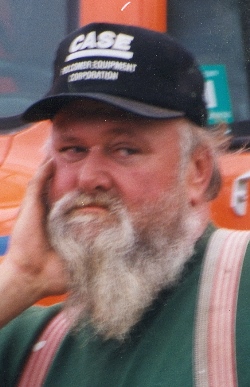 Merle Windsor Howard, 56, of Deale passed away January 21, 2014 at his residence. He was born June 25, 1957 in Annapolis to Merle and Katherine (Windsor) Howard. Merle was raised in Deale and attended Southern. He farmed with his father and brother on the family tobacco farm in Deale until 1990. He married Judy Alyce Martino on July 7, 1990. After their marriage Merle and Judy sold produce and also owned and operated a pumpkin farm in Deale. He was employed as a heavy equipment operator with Anne Arundel County for thirty years, retiring in 2006. After his retirement, he worked for West River Gardens as a wood cutter. Merle loved life on the farm; he enjoyed hunting, crabbing, collecting International tractors and guns, watching western movies, and spending time with his family, especially his grandsons.

He was preceded in death by his parents and a sister Nancy Riddle. Merle is survived by his wife Judy, a son Merle W. Howard, Jr. of La Plata, a daughter Stacy Renee Kepich and husband Gerry of Owings, a sister Cheryl Popejoy of Shady Side, and a brother James Jerry Howard of Glen Burnie. Also surviving are grandsons Dylan W. and Austin “A.J.” Kepich, both of Owings.