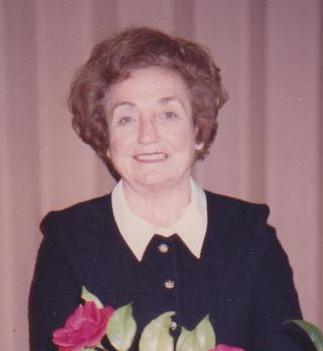 Mary Gloria Sesson Briscoe, 93, of Calvert County, died October 21, 2014.
She was born February 15, 1921 in Luzerne, Pennsylvania. She was the first daughter of Paul Sesson and Mary Onesko Sesson, who both immigrated to the United States through Ellis Island in the early 1900’s. Her siblings, who all predeceased her, include three brothers: John Nohena, William Sesson, and Michael Sesson; and one sister, Anna Sesson Stegura.
She graduated from Misericordia University in 1942 with a degree in Home Economics, and later from the University of Maryland with a Masters in Nutrition. Mary interviewed for a teaching position with the Calvert High School in 1944, where she continued to teach until 1965.
She met John “Jack” Dawkins Briscoe the following year after he returned home from World War II. They were married in June 1948 and she continued to teach until their first child Chloe (Ewalt) was born. Chloe was followed by John, Mary-Clare (McNatt), and Tommy.
In 1965, Mary continued to teach Home Economics at the Annapolis Junior High, and then later at the Annapolis Senior High until her retirement in 1980.
Mary was a President of Delta Kappa Gamma – an international society for key woman educators, a President of the Calvert Garden Club, a Master Gardener, served on the Judges Council of the Federated Garden Clubs of Maryland, and revived the Young Gardeners Club. She was also a member of the Altar Guild at Christ Church and the Architectural Review Board for Calvert County. Mary served on both the Christ Church Vestry and new Rector Search Committee.
Mary had a passion for painting, sewing, cooking, and gardening, and excelled at all four of these talents. Her many water colors and flowers graced her home with vibrant color.
She is survived by her four children, nine grandchildren, nine great grandchildren, and numerous nieces and nephews.
The family will receive friends at Mary’s home on Sunday October 26, 2014 from 3-6 PM. Funeral Services will be held on Monday October 27, 2014, 11 AM at Christ Church, Port Republic, MD. Interment will follow in church cemetery.
Memorial contributions may be sent to Christ Church, Calvert Hospice, or the Alzheimer’s Association.