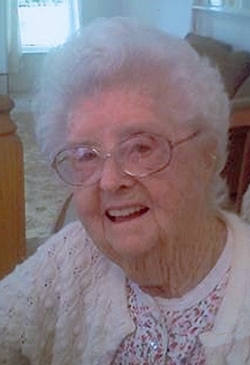 Mary Louise Nutwell, 92, a lifelong resident of Deale, passed away October 27, 2015 at the Mandrin Hospice House in Harwood. She was born August 17, 1923 in Deale to Tracy and Dora (Marshall) Randall. She graduated from Southern High School. Mary married John B. “Bunny” Nutwell on August 17, 1944 in Annapolis, and they made their home in Deale, until moving to Pasadena in 2009 with their son. She worked at Tracey’s Elementary in the cafeteria, retiring in 1986. Mary was a lifelong member of Cedar Grove UMC in Deale, where she enjoyed attending the many church functions and was a member of the choir. She also cleaned the church for many years. She enjoyed cooking, watching an occasional baseball game, and in her younger years was an accomplished ice skater.