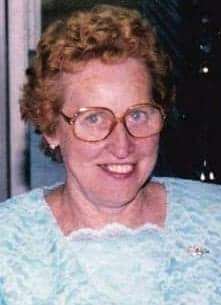 Born November 9, 1925 in Baltimore, MD, she was the daughter of the late Herbert Sunderland Gaither and Cora Amanda (Pickett) Gaither.

Lil graduated from Catonsville High School in 1944. She moved to Lusby, MD from Beltsville, MD in 1982 and was a homemaker. Lil was an avid community volunteer, and was a member of Olivet United Methodist Church, American Legion Auxiliary Unit 274, Prince George’s Cedarettes and Chesapeake Ranch Estates Homemakers.

Lil is survived by her children and their spouses, Michael and Brenda Ernst of Winchester, VA and Robert and Tracey Ernst of Chesapeake Beach, MD; her son in law, Robert Matters of Lusby, MD; and seven grandchildren and eight great-grandchildren. She was preceded in death by her husband George Blake Ernst in 2010, whom she married in Fort Madison, IA on April 9, 1947; her daughter, Carol Ann Matters; and siblings, Herbert Gaither, Jr., John Gaither and Mabel Sidaway.