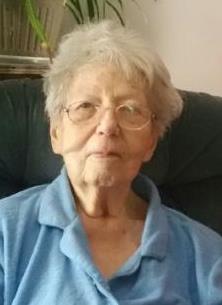 Mary Hervey Sword, 92, of Chesapeake Beach passed away December 30, 2016 at her home surrounded by family. She was born August 25, 1924 in Washington, D.C. to parents John Hampton and Lyda (Brown) Sims. She was raised in Mt. Rainier, MD and married George Sword on January 19, 1943. They lived in West Lanham Hills before moving to North Beach Park in 1954, and then Mary moved to Chesapeake Beach in 2010. Mary was primarily a homemaker, and was a member of the Eastern Star 104 in Prince Frederick. She enjoyed eating crabs, watching old movies, listening to Willie Nelson and playing slot machines and scratch-offs.
Mary was preceded in death by her husband George who passed away in 2001, siblings Edward, Elizabeth and John Sims, and a great-granddaughter Megan Loveless. She is survived by children Linda Theodore and husband Bobby of Richlands, NC, George Sword and wife Peggy of Orange City, FL, Elizabeth Loveless and husband Jay of Owings, Mary Sword of South Charleston, WV, and John Sword of Chesapeake Beach. Also surviving are seventeen grandchildren and twenty-one great-grandchildren.