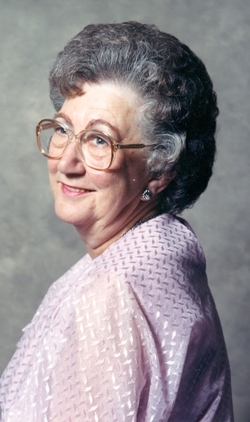 Mary Elizabeth Straub, 92, a longtime resident Chesapeake Beach, MD passed away September 13, 2012 at Calvert County Nursing Center in Prince Frederick, MD where she had resided for the past several years. She was born July 6, 1920 in Lower Marlboro, MD to Malcolm Joseph and Olive Reed (Jones) Bowen. Mary was raised in Lower Marlboro and attended Fairview Elementary and Calvert High School, graduating in 1937. Mary lived in Washington, D.C. and was employed at C&P Telephone Company where she was a supervisor until her retirement in 1976. She married John Straub in 1968 and they lived Chesapeake Beach. She was a former member of Lower Marlboro U.M. Church and was currently a member of the Telephone Pioneers, North Beach VFD Auxiliary, Calvert County Democratic Club and New Hope Baptist Church in Lothian. In her leisure time, Mary enjoyed doing needlework and visiting with her family and friends,. She also enjoyed watching sporting events, especially those in which her grandchildren and great-grandchildren participated. She was an avid fan of the Baltimore Orioles, and was fond of listening to country music.

Mary was preceded in death by her parents, her husband John G. Straub, brothers William, Joseph and Earl Bowen and sister Ruth Bishop. She is survived by a son Jesse Ray Stuart, Jr. and wife Carolyn of Dunkirk, grandchildren Joseph Shane Stuart of Eldon, MO, Jesse Ray Stuart III and wife Renee, and Marlin Taylor Stuart, all of Prince Frederick, and by two great-grandchildren, Sarah Stuart and Jesse Stuart IV. She is also survived by her sister Doris Knopp and husband Alvin of Deale, MD.