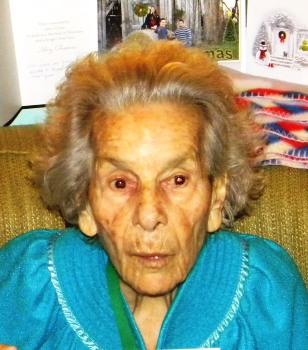 On Wednesday, May 30, 2012, Mary Edna Baker passed away at home in Myrtle Beach, SC. She was born Sept. 30, 1918, to Thomas F. and Dora (Crouch) Allred of Winston-Salem, North Carolina.
Mary attended the R.J. Reynolds High School where she was the Valedictorian for the Class of 1938. In 1940, she attended training at the Gallingier Hospital, in Washington, D.C. to become a “Candy Striper” in the medical field. While in Washington, D.C., she met Marshall H. Baker whom she married on November 29, 1941. Marshall worked for the Army Map Service located in Montgomery, County, just outside of Washington, D.C., while Mary was a domestic engineer taking care of their growing family. After 24 years of marriage, Marshall passed away on Tuesday, April 13, 1965, leaving Mary with 5 children from the union; Harry Thomas, Beverly Ann, Paul Carlton, Richard Douglas, and Mary Elizabeth Baker. At that time, Mary needed to find work and was employed by the Hecht Co., then Duvall High School, and finally the Prince George’s Health Department in Maryland. Mary retired from the health department in 1985, but not from life, she continued to burn the candle at both ends. Mary enjoyed traveling, swimming, ceramics, helping to build an A-Frame (from scratch), playing cards, night-life, laughing, meeting, greeting and making many new friends. She loves all of her children, grandchildren and great grandchildren, always treating them equally and was always there to help them. She enjoyed life and lived it to the fullest.
She was preceded in death by her parents and brothers; Thomas F. Allred, Jr. (Mutt) and Paul Allred.She leaves behind her children; Harry Baker (Yeda) of Upper Marlboro, MD, Beverly Anderson (Kenneth) of Myrtle Beach, SC, Paul Baker of Huntingtown, MD, Richard Baker (Cindy) of Lakeland, FL. and Mary Galemore (Fred) of Chesapeake Beach, MD., thirteen grandchildren and seventeen great grandchildren.