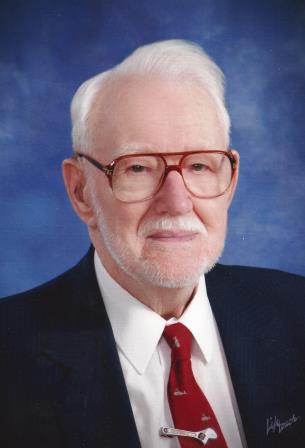 Marshall Hinners Damerell (“Marsh”) passed away peacefully at his Solomons, MD residence on June 27, 2016. He was born May 11, 1925 in Illinois to Chester W. and Erma (Hinners) Damerell. He married Frances Jeanne Williams of Muncie, Indiana on February 24, 1946. The couple met at Purdue University while Marsh was in Navy ROTC. Marsh was commissioned as a US Navy officer and served in the Pacific theater in WW II and then later in the Korean conflict, times that also stirred an inner love for the sea. He graduated from the University of Michigan with a degree in Mechanical Engineering in 1948.

Marsh loved machining and machine tools. He successively developed two prosperous machine shop businesses, in North Tonawanda, NY and Lancaster, NY. As a local businessman, he joined Rotary Club and was an active member for many years, filling various roles including club President.

Marsh & Fran raised their family and were instrumental in community organizations including their local church, school organizations, and Boy Scouts, where Marsh was a troop leader. As his love for the sea grew, he and a friend built a 16-foot sailboat that they sailed on Lake Ontario. That boat was progressively replaced by two larger sailboats, and the idea to sail around the world germinated. While his children completed high school and college, Marsh picked out the boat and planned the trip of a lifetime. He sold off half the business, and he and Fran departed in 1980 on an epic around-the-world adventure aboard Invictus, their seaworthy 38-ft ketch. Sailing to places from Panama to New Zealand to Capetown richly filled their lives and stirred others who heard their updates. After returning, they developed a program describing their trip with sequenced slides, music and narration. They showed it several hundred times to audiences cumulatively numbering in the ten thousands.

Marsh retired in 1987 to devote time to family, his love of machining, and a desire for travel. He and Fran settled in Calvert County, MD where Marsh set up a small machine shop in his garage. They were active in their church, the local Rotary club, the Circumnavigators Club and SCORE. They traveled to out-of-way places like the Azores, Antarctica, Turkey, Thailand and British Columbia.

Marsh and Fran moved to the Asbury Solomons retirement community in 2003. They routinely visited their children and families, and attended key events such as the graduations and weddings of their grandchildren. In 2015, family and friends joined at Asbury Solomons to celebrate Marsh’s 90th birthday. Those present showed pictures and told stories about how Marsh was special in their lives.