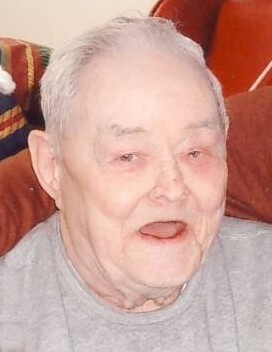 Marion Sebree Lewis, 90, of Martinsville Virginia formerly of Broomes Island, MD, passed away May 17, 2012. He was affectionately known as “Whitey” or “Pop” to all who knew him. Born on a farm outside Cincinnati Ohio April 4th 1922, his favorite stories were of his life growing up on the farm. “Pop” was a WWll Navy Vet., a gunner’s mate who crewed on several “Liberty Ships.” He retired after 33 yrs. working for the B&O Railroad. He was a 30 year life member of the Glen Burnie Elks Lodge and current member of Calvert Lodge #2620. He loved to go crabbing and fishing for flounder on the eastern shore in Md. and the outer banks. Many will remember talking to him at the coffee counter in Don’s General Store every morning.
He is preceded in passing by his wife Bessie May and daughter Anna May, brother George and sister Betty Sue and father Ralph and mother Mattie. He is survived by his daughter Patricia Goehle and son-in law Don, Son Marion S. Lewis Jr., and daughter -in-law Cathy and 4 Grandchildren Michael Lewis Goehle and Wendy Kirkpatrick, Marion Steven Lewis and Kimberly Brooks and 8 Great Grandchildren Nicholas and Carter Goehle, Marion Steven Lewis, Jr. and Rayne Lewis and Maliyah, Madison, and Makayla Brooks and Emma Kirkpatrick.