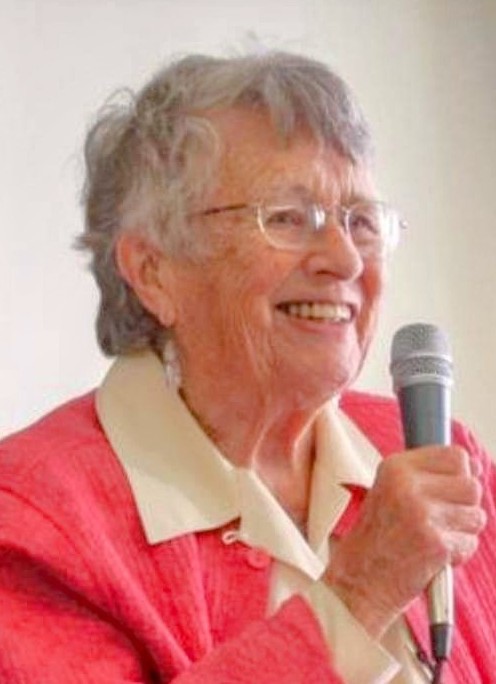 Long time Calvert County resident Marie Louise Andrews died at her home at Asbury-Solomons Retirement Community on Thursday, September 16. Her daughter Kathy Andrews was by her side. Marie was 97.

Born in Lismore, Australia on July 7, 1924 Marie will be badly missed by her family, and long remembered locally by the many people whose lives she touched across four decades of civic activism in Calvert.

In November 1934 a green-eyed 10-year-old girl stood on a bluff high above coastal Townsville, Australia. As she leaned into the fresh trade winds that swirled through her thick brown hair, young Marie looked outward over the dark blue Pacific, and wondered, ‘How big is this world? And where in it might a young girl go?’

Her father a manager for the Commonwealth Bank of Australia, Marie’s family lived in Lismore, Townsville, Hobart, Sydney and Brisbane during a peripatetic girlhood. Marie was the eldest of three children.

In 1943, deep into World War II – and a mere nine years after that trade winds afternoon – Marie became engaged to a Yank, Army Air Corps Second Lieutenant John Stewart (Jack) Andrews. Marie and Jack would be inseparable for 75 years, until his death in 2018.

Marie and Jack were married in Brisbane on 22 March 1944. A first child arrived in July 1945. The young family sailed from Australia in 1946 on a transport ship laden with other Aussie war brides, headed for Jack’s home in Dayton, Ohio.

Over the ensuing 25 years, as Jack ascended the corporate ladder in the department store business, Marie applied her energies to raising their five children, and to volunteer service with College Hill Presbyterian Church in Dayton.

Tragedy came to the family home in May 1967, in the form of two uniformed Army officers who appeared at the front door, informing Marie her Australian-born son, John Michael, had been killed in Vietnam. Mike had enlisted as a combat helicopter pilot.

Searing though it was, Mike’s death served as a sort of catalyst for Marie’s growth and development. Over the course of the next 8 years, as Marie and Jack moved from Dayton to Cincinnati, and then to Vermont, where Jack served as President of Goddard College, Marie earned her Bachelor’s degree, and a Master’s degree in Clinical Psychology.

When Jack accepted a senior position with the Peace Corps in 1975, the couple moved to Washington, D.C., where Marie applied her energies and education to political activism, volunteering on Jimmy Carter’s 1976 presidential campaign.

After Carter’s 1977 inauguration, Marie became a Senior Administrative Aide in the Executive Office of the President. Her last paid position had been as a Brisbane bank teller, in 1945. Three decades later she found herself working in the White House – quite the progression!

Marie and Jack purchased their Long Beach home in 1976, fulfilling Jack’s promise to Marie when they left Brisbane that, someday, they would once again live on the water. The move laid the groundwork for four decades of tireless civic work in Calvert County – the period in which Marie truly came into her own.

The League of Women Voters of Calvert County; Calvert Hospice; Compassionate Friends of Calvert County; Calvert Collaborative for Children and Youth; the St. Leonard Garden of Remembrance; Edward T. Hall Aquatic Center. These are among the many entities and community initiatives to which Marie applied her vision, her motivational and organizational abilities, and yes, the occasional arm twisting at County Commission meetings, to effect positive social change in Calvert.

An ordained Elder in the Presbyterian Church USA, Marie was, along with Jack, a longtime congregant of Westminster Presbyterian Church in SW Washington. Marie’s civic activism was driven by a strong belief in Christian compassion, as recorded in the New Testament teachings of Jesus Christ, and a visceral commitment to social justice and racial equality.

Marie’s final project was the publication in 2020 of Seasons: Poems of Heartbreak, Hope and Healing, her collected poems dealing with death, grief and recovery. Seasons is available on amazon.com.

Not long before her death Marie said. ‘I’m fortunate to have lived a very fulfilling life. I was married to a loving and truly kind man for 75 years. Together we raised five good children. I’ve travelled around the world three times, been to Alaska and seen the Canadian Rockies. And hopefully, I’ve made a positive impact on families and children in Calvert County. What more can one want from a life?’

Marie is survived by son Jeffrey of Hawaii; daughter Kathy of Vermont; son Dick of Colorado and Florida. Marie and Jack’s second child, William Douglas Andrews, died in 2018 shortly after Jack’s passing. Her younger siblings Margaret and Robert are still living in Australia. Marie is additionally survived by six grandchildren and eight great-grandchildren.

Marie’s wish was that her cremated remains be scattered: on the waters of the Chesapeake off Long Beach; on son Mike’s gravesite in Dayton, Ohio; and into her much beloved Pacific Ocean. Where, as a young girl in 1934 she leaned strong into the Springtime trades, and wondered where a young girl might go in this world. A very long and well-lived way, it turns out.

In lieu of flowers, the family suggests memorial contributions be made to the League of Women Voters of Calvert County.

To donate see web address below.

The pandemic has taken many things away from us including connections. I’m sad to learn of Marie’s passing. She did indeed live a wonderful life and I was totally blessed to know and work with her. She was an inspiration and it’s her work and example that has inspired my work. She worked in the community all her life and she certainly shared her wisdom and enthusiasm. Condolences to her many friends and family and especially to our community.

The pandemic has taken many things away from us including connections. I’m sad to learn of Marie’s passing. She did indeed live a wonderful life and I was totally blessed to know and work with her. She was an inspiration and it’s her work and example that has inspired my work. She worked in the community all her life and she certainly shared her wisdom and enthusiasm. Condolences to her many friends and family and especially to our community.