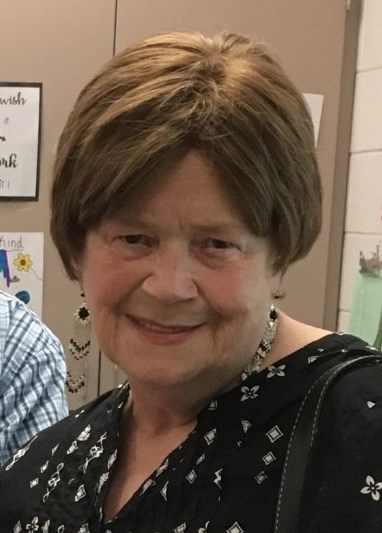 Margaret Jacqueline Pyle Platz, affectionately known as “Jackie” and never by Margaret, passed away unexpectedly on the evening of Thursday, November 21, 2019 at Georgetown University Hospital in Washington, DC.

Jackie will be remembered as being the most loving and devoted daughter, grandmother, friend, sister, mother, and aunt. These are listed in no particular order because every role was equally as important to her. That is just who she was. Jackie devoted her life to caring for those she loved. Whatever was needed, whatever she had to offer, she shared. Even if that meant being confined to her bed the next day from exhaustion, she still made the time and effort to be there for everyone.

Jackie was born in Portsmouth, VA, on February 8, 1953, to George (Bob) and Harriett Pyle. Jackie’s father was in the Navy and during their frequent moves she learned to make friends easily. Jackie never met a stranger. Within minutes (and at times, much to the embarrassment of her children) she would learn the life stories of everyone in the line at the grocery store by the time she checked out. She befriended everyone at every school, sports team, or organization her kids and grandkids were involved in.

Jackie spent her teen years in Bowie, MD and graduated from Bowie High School. She was well-liked and loved by many.  She met Edward Platz, an incredibly lucky man, through her sister and they began dating. On November 3, 1973 Jackie and Ed married in the Post Chapel at Fort Meade, MD and after their honeymoon moved into their first home in Upper Marlboro, MD. In 1978 they welcomed a son Edward, Jr. (Joey) and in 1985 twin girls Jacquelyn and Amanda (Mandy). Jackie and Ed raised their family in their Upper Marlboro home until 2009 when Ed retired and they moved to Solomons, MD to be closer to the grandkids.

Jackie spent her career as a Stay-At-Home Mom who never stayed home. She was always running, helping her family, and making sure everyone was where they needed to be and had what they needed. This love and attention extended to her children’s friends as well because everyone was her baby when you were at her house.

Creating beautiful things was something that Jackie loved to do. She was very talented in crafting, a gift she passed down to her daughter, Amanda. The recipient of any gift could feel the love and care it was made with. She loved playing games with her mother and sister, Ivy. She loved reading books and watching true crime dramas and detective shows. Jackie loved Christmas and creating a warm and inviting home to celebrate in. Her Christmas parties were one of the most anticipated events of the season. Her peanut butter cookies, shrimp spread, and deviled eggs were also the hit of every party.

Her greatest passion undoubtedly was her grandchildren. Everyone she met knew about her 11 grandchildren. Most of these people were also treated to pictures of her grandkids, possibly against their will. Jackie was so proud of her family!

Jackie is survived by her mother and best friend, Harriett Harper Pyle, of Bowie, MD; her husband of 46 years, Ed Platz; her children, Joey Platz, and wife, Trisha, of Lusby, MD; Jacquelyn Pudliner, and husband, Tom, of Leesburg, VA; and Mandy Seger, and husband, Danny, of Solomons, MD; her grandchildren, Josh, Brittany, Jason, Brian, Daniel, Logan, Tommy, Evie, Joe, Jacob, and Katie; her siblings, Ivy Morrison, of Bowie, MD; and George Pyle, Jr., and wife, Carol, of Mechanicsville, MD; her beloved dog, Honey; and so many nieces, nephews, cousins, and friends whose lives she was a part of.

Jackie was reunited in Heaven with her father, Bob, who passed away in 1987. They are probably playing Yahtzee, poker, or maybe even bowling right now.

Our lives will never be the same without her. Our hearts are broken, but let’s remember Jackie for the beautiful life she lived, for the special way she made us feel, and the joy she brought to the world, because that’s what she would want for us.

In lieu of flowers, please consider making a contribution in Jackie’s honor to the Lupus Foundation of America on their website:  www.lupus.org

We are each of angels with only one wing. And we can only fly by embracing each other. Luciano Dr Crescendo (b. 1928) Italian Poet. A favorite poem of Jackie’s and mine. I enjoyed 30 years of friendship. I became family and a sister along the way. We were co-room mothers and in scouting leadership together. Trouble makers through and through, ha! We broke records on how very very long our phone conversations could be!!!! We kidded each other about breaking World Records by ourselves in the length of our calls.
We loved making crafts and our lovely teas. So many laughs and made so many memories together. Jackie loved her family and Christmas!!!!! Mom Harriet, I cannot imagine what you are going through, as a parent we are supposed to pass on before our children. My hugs are on their way to everyone! I am looking forward to delivering them in person and sharing the fantabulous memories.