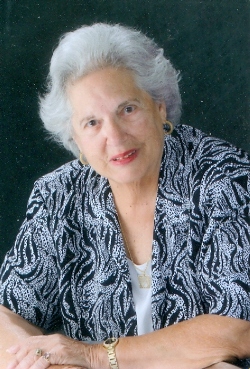 Margaret Gemma DeCesaris Mudd, 85, of Fenwick Island, DE and a former resident of Deale, MD, passed away May 20, 2013 at Anne Arundel Medical Center in Annapolis. She was born February 18, 1928 in Philadelphia, PA to Marco and Ida (Jennetti) DeCesaris. Margaret was raised in Washington, D.C., graduated from Eastern High School and later moved with her family to Charles County. She married F. Raymond Mudd, Jr. on November 21, 1948 and they lived in Prince George’s County until moving to Deale in 1965. Margaret owned and operated Mudds Liquors with her family in Deale. She was previously employed by the Federal Government and the Hecht Company. Mr. Mudd passed away in 1975 and in 2000, Margaret relocated to Fenwick Island, DE.
She was an active member of St. Luke’s Catholic Church in Ocean City and was also a longtime member at Our Lady of Sorrows in West River, where she served as a Eucharist Minister for many years. She was also a member of the Sons of Italy and the V.F.W. Post 8296 in Ocean City. In her leisure time, Margaret enjoyed crocheting, playing cards with her girls, watching the Redskins and Orioles, but most of all she cherished the time she had with her family.
Margaret was preceded in death by her husband; her parents; three brothers, Marco DeCesaris, Jr., Geaton “Sonny” DeCesaris, Charles DeCesaris; three sisters, Theresa Ziccardi, Marie Ferrante and Josephine Vendemia. She is survived by children, Catherine M. Wright and husband Dewey of Monticello, GA, Francis Raymond Mudd III and wife Heidi of Deale and James E. Mudd and wife Kathy of Monticello, GA. Also surviving are grandchildren Francis Raymond Mudd IV and wife Terri, Christine E. Clark and husband Shane, Albert A. Mudd and wife Jessica, Dewey A. Wright and wife Kelly, Alison Keener and husband James, Amanda Brewer and husband Tommy, Jessica L. Thompson and husband Timothy, James E. Mudd and Hannah and Emily Pope; and by 16 beautiful great-grandchildren. She is also survived by her sister, Alice Sacchetti of LaPlata, MD; and two brothers, Anthony DeCesaris and wife, Josephine, of Fenwick Island, DE, and Albert DeCesaris and wife, Rosemary, of Riva, MD.