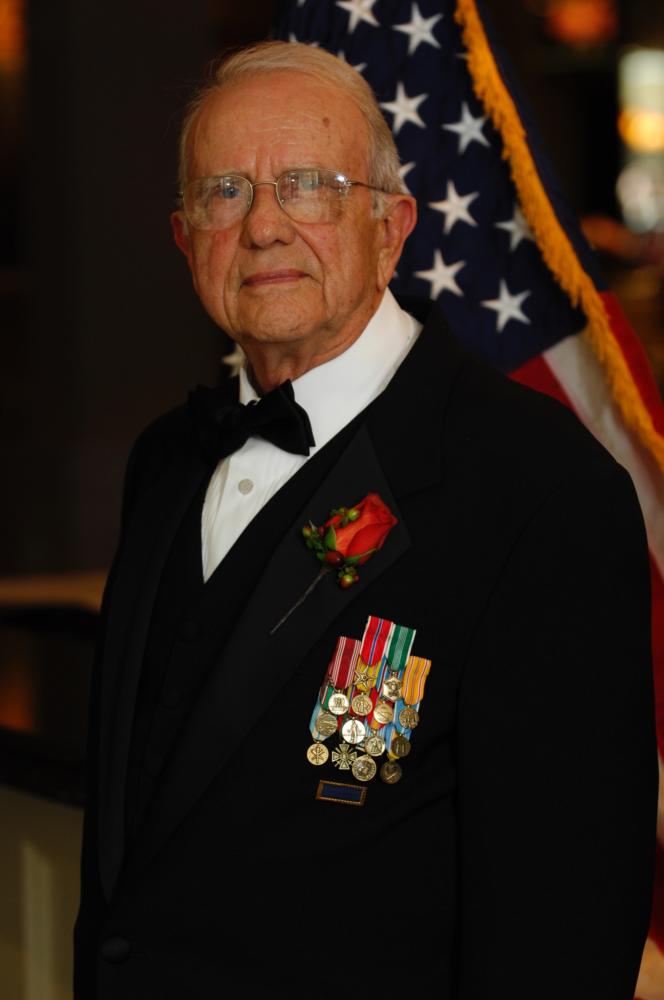 Due to the COVID-19 Virus and the executive orders limiting gatherings, services for Lt. Col. Robert E. Berry at Arlington National Cemetery will be now be private. The funeral service and burial can be watched live on Thursday, June 4, 2020 starting at 12:50 pm via the internet at the following link,  https://my.anc.media/3cT5A13 , which can be copied and pasted into your web browser.

Robert E. Berry (Bob) of Lusby, Maryland, 101, passed away on Monday, February 3, 2020.  He was preceded in death by his father Edward P. Berry and his mother Mary S. Sasse and brother Donald Berry and by his beloved wife Mildred in 1989.

Bob was born April 6, 1918 in Wilmington and attended schools through high school. He earned an Associate Degree and certification as a Funeral Home Director. He worked in that field several months in Philadelphia until he was drafted into the Army in 1941.

In January 1943 he attended the Quartermaster Officer Candidate school and graduated as  a Graves Registration Officer. He was promoted to 1st Lieutenant and platoon leader of the 3rd platoon 607th Graves Registration company.  In June 1944 the 607th company was sent to England to prepare for Operation Overlord, the invasion of Normandy.

On June 6, 1944 the 3rd platoon landed and began work at a temporary cemetery on Omaha Beach until July 9 they moved their operation to the primary objective now the Normandy American Cemetery and Memorial.  During the next two years the 3rd platoon established and operated cemeteries in various locations in France and adjacent countries.

In January 1946 he was honorably discharged as a Captain. He returned home to Delaware and married Mildred Phillips and resided in Wilmington. In 1949 he was called back to service by the Army due to the Korean Conflict.  He became the Commanding Officer of the Central Identification Unit stationed in Japan.  He earned the Bronze Star for his work in Japan.

After the end of the conflict, Bob returned to his home in Silver Springs, MD and began work at Walter Reed Medical Center in Washington, DC and was promoted to Lt. Col. and retiring from the army in February 1965. He remained at Walter Reed in civilian positions until retiring in 1975.

Bob and Mildred moved to their home in Drum Point to enjoy his retirement. Over the years he became a familiar and beloved member of the Drum Point and Lusby community that he dearly loved.

Services will be held at Arlington National Cemetery on June 4, 2020 at 1:oo pm, however will be private due to the  COVID-19 Virus. The services can be watch live on the internet at https://my.anc.media/3cT5A13 . In lieu of flowers, donations to a veterans charity of your choice, such as the Disabled American Veterans is encouraged.

I am related to my Uncle Bob through his wife Mildred, the sister of my father. While Bob was a post-war Army officer and working in Japan, Aunt Mildred lived in an apartment near us in Wilmington, Delaware. Sometimes during her babysitting she would tell me of her love for Bob and how she missed his steadfast personality and loving ways. This made a profound impression on my young mind.

Upon Uncle Bob’s return he would fill me with tales of his foreign travels and, in retrospect, I think this began and fueled my fascination with geography, history and culture.

As a teenager I fondly recall spending various times at Drum Point tooling around on the Patuxent in Bob’s boat and walking with him at the Calvert Cliffs.

Bob was also a good mentor to my father, a high school classmate and also a longtime Army officer. Bob made sure that dad enrolled my mom for military survivor benefits. I will always be grateful for that action by Bob (as was my late mom).

For the last 15 or so years I would rendezvous with Bob for lunch as he passed through Newark, Delaware on his way to Exton to visit his beloved relatives Linda and Dick. There ensued more great conversations that sort of capped our earlier relationship and, of which, I shall treasure beyond time.

From his exploits on D-Day to his love for his family, to things and events we don’t even know about, the world is a better place because of my Uncle Bob. Rest in peace my good friend, kinsman and mentor.