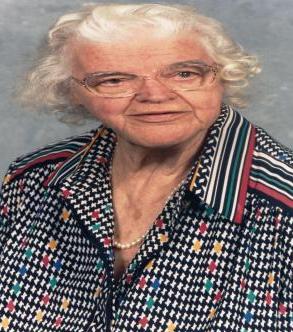 Lola Mae Parks, 104, of Solomons, MD passes away on September 1, 2012 in Solomons, MD. She was born on March 4, 1908 in Litchfield, Nebraska to Arthur Henry and Dora Eta Hughes.
Lola was a very accomplished woman, she graduated from Fletcher College; located in Iowa, with a bachelor degree in 1935. After finishing college she moved to San Diego, CA with her parents and sister. While in San Diego she had taken and successfully passed the examination to join the police force in 1940. She would spend four years on the police force; she later transferred to become an assistant probation officer for San Diego County, CA. She met her future husband while he was stationed on a destroyer prior to World War II breaking out in San Diego. She would later move out east when he returned home from the war. While here in Maryland she had taught in Calvert High School. She also received her masters from the University of Maryland in 1958. She would go on to become supervisor of public personnel for the Calvert County Board of Education, and later the Director of Pupil Services until her retirement in June of 1976. Lola has been on many boards and committees such as Administrative board for St. Paul’s UMC, Chairmen of Volunteers for Calvert Hospital, and Co-Chairman of Library Committee for Asbury-Solomons just to name a few. She had also taught Sunday school at St. Paul’s UMC for over 47 years. Lola’s main hobby is China painting of which she has many beautiful examples.
She was preceded in death by parents, her husband Nathaniel Parks, her sisters, Mariana Hughes, Ruby Dean, Ruth Davis, brother, Milford D. Hughes, niece Jacqueline Herndon, and nephews Richard and LeRoy Dean, and Milford L. Hughes.
She is survived by her niece, Vicki Hurt and husband Robert of Clyde TX; nephew Joe Dean and wife Jeniene of Leander, TX; and many great nieces and nephews. A visitation will be held on Monday September 10, 2012, 10-11 AM, at St. Paul’s United Methodist Church, Lusby, MD. A funeral service will follow at 11:00 AM. Interment will follow in the church yard cemetery.
The family has requested that in lieu of flowers contributions may be made to the St. Paul’s UMC Building Fund, 110960 HG Trueman Rd., Lusby, MD 20657.
Arrangements by Rausch Funeral Home, Port Republic, MD