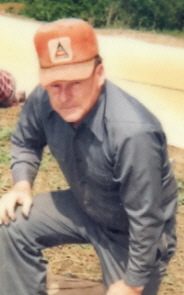 Lewis Brady, age 79, of Owings, MD passed away March 23, 2013 at Calvert County Nursing Center. He was born in Dunkirk, MD October 15, 1933 to Thomas Joseph and Addie Rebecca (Grierson) Brady. Lewis attended Calvert County School and graduated from Calvert High School in 1952. He joined the Army in 1955 and served until being discharged in 1957. Lewis was married to Anna Hardesty on May 16, 1959 at Davidsonville Methodist Church. They made their home in Chaneyville on the family farm where Lewis was a life long tobacco farmer and was a member of Calvert County Farm Bureau. Lewis was an avid Baltimore Orioles fan and in his younger days enjoyed rabbit hunting
He was preceded in death by his parents Thomas and Addie Brady, five brothers Earl, Frank, Gene, Kenneth and Bobby Brady and one sister Viola Binger
Lewis is survived by his wife Anna L. Brady, son S.L. Brady, Jr. and his wife Amanda; three grandchildren Liana, Travis and Rebekah Brady and one sister Addie Ward and her husband Jack all of Owings.