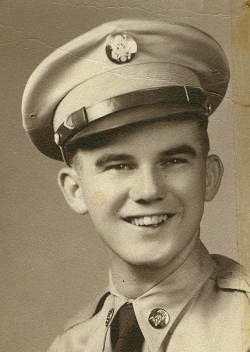 Leonard Russell “Buck” Jones, Jr., 83, of Friendship passed away December 29, 2013 at Charlotte Hall Veterans Home. He was born May 19, 1930 in Lower Marlboro to Leonard Russell and Gertrude Marie (Griffith) Jones. He was raised in Lower Marlboro and attended Fairview Elementary and Calvert High School, later earning his GED. He married Laurene Owings on July 24, 1954 in Friendship, where they also made their home. Buck has been a resident of Charlotte Hall Veterans Home for the past six months. He entered the United States Army on August 19, 1950, serving until June 6, 1952. He completed his reserve obligation on September 18, 1953, and was honorably discharged as Sergeant First Class. While in the Army, he earned the Korean Service Medal with two bronze stars and the United Nations Service Medal. He was employed as a heavy equipment operator with the State of Maryland, and also owned and operated an excavating business for fifteen years. After retirement, he worked part-time at Rod-n-Reel driving the tram, was a postal clerk at the Friendship Post Office, and a clerk at the former Friendship Family Grocery. He was a member of the American Legion Stallings-Williams Post 206 in Chesapeake Beach and Friendship United Methodist Church. Buck enjoyed gardening, hunting, fishing, western movies, vacations to Ocean City, and spending time with his family.

Buck was preceded in death by his parents and a sister Alma Ruth Hall. He is survived by his wife Laurene Owings Jones of Friendship, a son Larry R. Jones and wife Gale of Sunderland, and daughters Wanda L. Hyde and husband Billy of Fairhaven and Katherine M. “Kathy” Wood and husband Donnie of Friendship. Also surviving are grandchildren, David and Danny Hyde and Ryan and Kyle Wood, and a great-granddaughter Alexis Hyde.