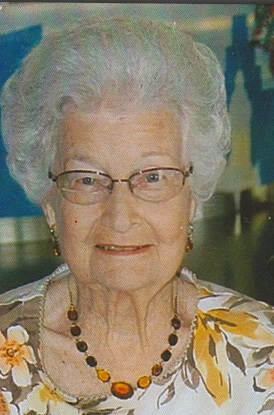 Laura King Marchand passed away on December 1, 2019, she was 93. Laura was born in Prince Frederick, Maryland on August 29, 1926 to the late Ethel and James King. She was preceded in death by her husband James Marchand in 1976, and her granddaughter Cheri Anne Tarr in 1994, as well as her seven brothers and sisters: Anne V. Roming, Milton O. King, James J. King, Ethel B. Bowen, Robert L. King, Lillian C. Wilhelm, and Hellen I Weber. After Graduating from high school Laura moved to Baltimore to live with her sister and found her first job as a Teletype Operator for Western Union during WW II.
During Laura’s lifetime she worked as the Acting Editor of the Calvert Journal Gazette and for many years she was the Office Manager at Climatemakers of Maryland, until her retirement in 1991. Laura was always a very active member of her community and her church, which was St. Paul’s Episcopal, where she was a member of the Altar Guild and the choir, Laura was also always up for the task and the hard work of the church’s annual Christmas Bazaar. During later years, Laura became a volunteer at Calvert Memorial Hospital, where she worked in their gift shop. She loved this job and adored the other volunteers with whom she worked. She volunteered there faithfully every week for years until she could no longer drive and had to unwillingly give up her position.
Laura is survived by her daughter Marilyn Tarr, son-in-law Buddy Tarr, granddaughter Tonya Aguilar and husband Wil Aguilar, three great-granddaughters, Kaitlyn, Hannah and Paige, one great-grandson Dominic and many nieces and nephews. Laura’s favorite pastime was being with her family, spending time with her grandchildren and great-grandchildren, watching them grow up and being very active in their lives.

Our prayers go out to Laura’s family and friends. She will be fondly remembered and missed by many friends at St. Paul’s.

Marilyn and Family, I was so sorry to hear of your mom’s passing. Unfortunately I heard about it too late to attend the service this week. I will always remember her fondly as one of the church mothers that looked after all of us at St. Paul’s Sunday School all those years ago. Doug says he remembers her as a good neighbor in that small section of German Chapel Rd where you lived. I know Shirley was fond of her as well. She lived a long full life and you and Buddy took excellent care of her as she got older. She was a fine lady and will be missed by many. Our thoughts and prayers go out to you and your family – the last one of her sibling group – what a large and loving family it was!!