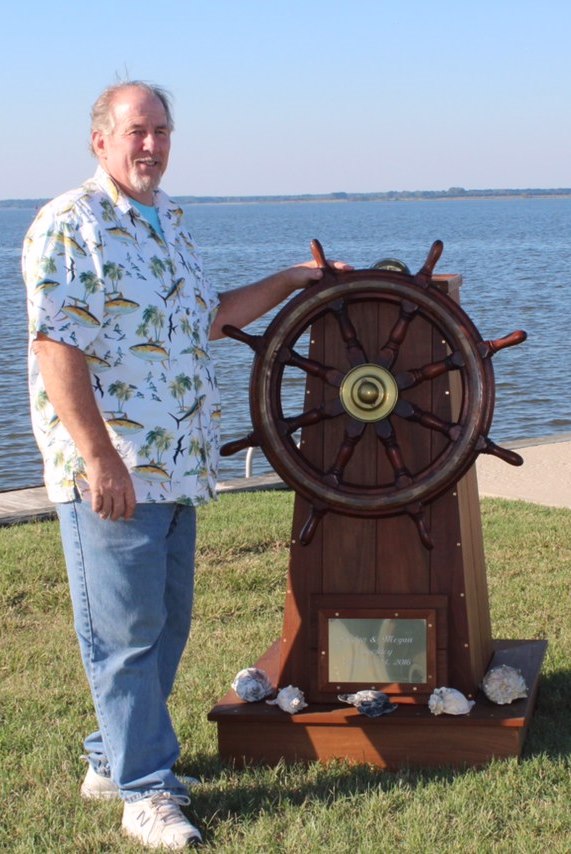 Kent Vernon Gessford, 63, of Shady Side passed away October 13, 2019. He was born July 26, 1956 in Cheverly, MD to Richard Leslie and Mary Frances (Shifflett) Gessford. Kent was raised in Shady Side where he lived his entire life along with his siblings and graduated from Southern High School. He built his reputation as an excellent plumber with McNew and Sons Plumbing, Inc. and later became a master plumber, owning and operating Kent V. Gessford Plumbing, Inc. Kent was known as a hard worker and spent many years commercially crabbing and was proud to have received his Captains license along the way. In his spare time, Kent enjoyed hunting, fishing with his brothers and friends, crabbing, reading, building cars and boats, and his dog Chance, who will miss him greatly. Kent was also proud to have achieved his lifelong goal of building his home in Chincoteague, where he and Stephanie would spend their days. Kent will be remembered as an intelligent, hardworking man who excelled at everything he did.

Kent is survived by his children Kent J. Gessford and wife Darci of St. Leonard, Wayne W. Gessford and wife Megan of Prince Frederick, and Michael D., Victoria F., and Robert D. Gessford, all of Shady Side and his sweetheart Stephanie Younker of Shady Side. He is also survived by five grandchildren and siblings Richard “Dickie” Gessford, Cathy Thomas, and William and Harry Gessford.

Stephanie, my heart is so sad for you and his children, please know that we are here if you need us. Elaine Catterton.

Michael, sorry to hear about your Dad’s passing. You and your family are in my prayers. Tony Kime Annaplois Maritme Antiques

My condolence goes out to the whole family. Kenny was one of my best friends growing up in Cedarhurst. We always spoke and remained friends. He was a very good person and will be missed greatly.

I’m so sorry for your loss, Kenny was a wonderful friend who we will miss terribly. If you need anything please don’t hesitate to ask. Hugs Bobby and Linda

Our deepest sympathy to the Gessford family. Kenny was a good man. Danny and Pam Townshend.

My deepest condolences to the Gessford family. I knew Kent professionally and respected him for his honesty and for the help he always gave to us. He’ll be greatly missed.

I am so sorry to hear this. He was a great plumber. Our thoughts are with the family.

My childhood memories revolve around living next door to Michael, Victoria and Robbie. I remember playing in the yard and outside of Kent’s office as he worked. My favorite memory is watching him work on his boat. Michael and I would hang around and ask questions-and help in any way we were allowed. He was always a hard worker and his strong work ethic will live on though his children. My thoughts and prayers go out to the family.

Thinking of you all. Hope that many happy memories bring you comfort at this sad time.

I am so saddened by his passing. Kenny was a wonderful man with a great smile and personality. He will be missed by many.

Unbelievable!!! I’ve known Ken for over 40 years form a child to now an adult . The thing about Ken I will always remember the most is his dedication to taking care of his family and his red truck constantly up and down Shadyside rd. on his way from customer to customer and my family being one of them. This is truly sad to hear and I wish to all his children and family my greatest condolences and prayers.

Kenny and I were good childhood friends. We shared many, many experiences growing up in Cedarhurst in the 60’s. After high school I probably saw him only briefly once or twice on jobs where my father and I were working, but I saw then that he had grown into a caring and kind-hearted man. I’m sad to hear of his passing at what now seems like a young age and my heart goes out to his loved ones. At times like this, I am reminded that I need to get my priorities straight; have I given my heart to God and will I be ready when Jesus comes?

Learned today that Kenny is gone after being in Fl for a month from a common old friend who went to school with him. Was a classmate to me in 1st and 2nd grade at Shady Side Elementary as to Ms. Moreland an Mrs. Krishoff as teachers there. Kenny and I went into the would in Shady Side and cut down and brought the Xmas Tree to our 2nd grade class at Shady Side Elementary. I lived in Shady side long after these grades of change and I knew Kenny when in Jr. High even though I had to move to Annapolis in 1964 and continued our friendship thereafter. I went sailing with his parents back in early 70’s and remember his father’s Chesapeake Log Canoe sailboat in Cedarhurst harbor long after it sunk and how his father was a graduate of George Washington University as a Civil Engineer and all the dogs around their home such as Rolly and how Kenny would shout at that dog. My family lived in Cedarhurst up until last year when they bought in 1954 and miss it now. I thought of Kenny as “a” part of Shady Side and will always have fond memories of our fun in Shady Side long ago.