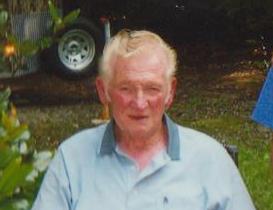 Junior Halterman, 84, of Prince Frederick, Maryland passed away on July 3, 2017 in Prince Frederick, MD. He was born on February 20, 1933 in Ellicott City, MD to the late Noah A. and Louise Hardy Halterman. Husband of the late Leila Virginia Halterman, he is also preceded in death by his siblings, Bill Halterman, Jimmy Halterman, Betty Shifflett, and Mary Bowen.
Junior worked alongside of his father, driving a logging truck at a very young age. Junior served in the Army from 1954 to 1959. He got a decoration his M9 Carbine Sharpshooter skills. After he received an honorable discharge from the Army, he started his own welding business, which he ran till he got a job with Vivian Humphreys Excavating, where h helped with the widening of Rt. 4 to a dual lane highway.
In 1968 he went to work at Calvert Cliffs Nuclear Power Plant with Bechtel as a heavy equipment operator. He retired in 1996 to take care of his wife and grandchildren.
Junior loved to watch the Baltimore Orioles play ball, John Deere tractors, and spending time with his family and friends.
He is survived by his son, Steven Halterman and his wife Tammy, grandchildren Lindsay N. Halterman, Steven N. Halterman and his wife Jen, and Jesse T. Halterman. He is also survived by great grandchildren, Ashleigh Brown, Maddie Brown, and Emma Halterman, and a brother Joseph Halterman.
The family will receive friends on Monday July 10, 2017 from 10-11 AM at the Rausch Funeral Home, 4405 Broomes Island Road, Port Republic, where services will follow at 11 AM. Interment will be in Southern Memorial Gardens. Memorial contributions may be made to Calvert Hospice.