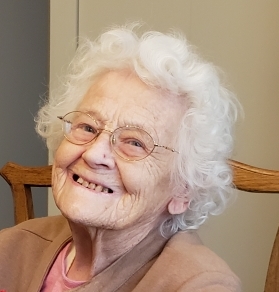 June Helen Kretzing, 100, of North Beach passed away January 7, 2020 at Sage Point Assisted Living in La Plata. She was born June 24, 1919 in Pennsylvania to Charles Benjamin and Emma Jane (Matlick) Brownfield. June was primarily a homemaker and also worked in the nursery at Andrew’s Air Force Base and later in the cafeteria at Forestville Elementary School. She was a member of St. Anthony’s Catholic Church, where she was active in the Ladies of Charity. She also volunteered for Meals on Wheels and the St. Anthony’s Food Pantry. She enjoyed helping the elderly, children and animals. She also enjoyed watching sports and spending time with her family.

Following the Mass on Tuesday, a reception for family and friends will be held in the Church Hall.

June was always so kind to me. I knew her from St. Anthony’s. She will remain forever in my heart. Condolences to the family.

When I was a seminarian, Paul and June would often give me a lift to Mount Calvary where together we would participate at weekday Mass. They were a wonderful couple with a sweet family. I can still remember the difficult time when they lost Tom. Many of us were just kids but it was a powerful reminder of mortality. I can still see in my mind’s eye that garden of theirs behind the house on Springdale Road. It was literally a miniature farm! They were truly good neighbors. June always remained a daughter of the Church. I have every confidence that she is now with the Lord. “Please, June, put in a word for me.” God bless you. Rest in Peace. Fr. Joe Jenkins

June was a spirited, independent, charming woman, who gave of herself to everyone. Beloved cousin to my father, Charles “Bill” Springer, June was a gracious host to my siblings and I whenever we visited her. We will miss her wit and spunk.
Hugs to the family❤️,
Barbara Yingling

Dear Sweet June! She will surely be missed. I was raised on Leona Street and never heard a single bad thing about the Kretzing’s! I was around 12 years old when the tragic accident happened to her Son Tommy (9 years old). All the neighbors were so very sad as we knew this would be a terrible time for June. She went to Mount Calvary Church every morning after that, to light a candle in memory of Tommy. After all these years, I think she still did at St. Anthony’s.
I use to see her at the Andrews AFB commissary with her Daughter Carol. We always hugged and laughed as we were so happy to see each other. I tried to send her a note every week and she did the same to me. Her 100th Birthday celebration was wonderful! I am thankful I was able to be there. May God be with all her Children and Grandchildren. You have received a wonderful heritage from your dear Mother and Grandmother. I will miss my Friend!