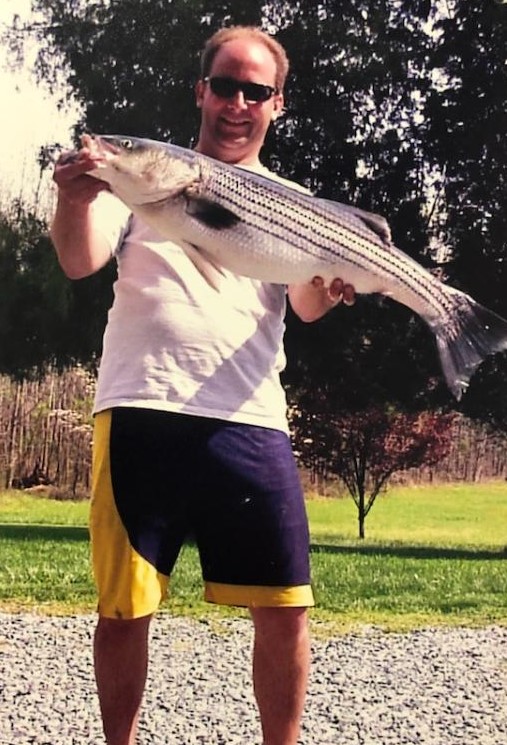 Joseph Peter “Joe” Torre, 51, of Huntingtown passed away November 10, 2020 at his home surrounded by family. He was born November 19, 1968 in Cheverly to Philip Joseph Sr. and Kathryn Alice (Hunter) Torre. Joe was raised on the South River in Turkey Point in Edgewater and he spent his childhood swimming, crabbing, fishing, and ice skating on the river. He is a graduate of South River High School. Joe married his wife Nicole on December 7, 1998 and they lived in Riva for a year before moving to Huntingtown. He was employed as a construction manager for the Smithsonian Institution and was also a member of St. John Vianney Catholic Church in Prince Frederick. Joe was an extremely talented person who could fix anything. He renovated his entire house and made his own solar hot water heater. When he wasn’t tinkering with things around the house, Joe was fishing, crabbing, and watching his daughters play sports. He loved spending time with his family and will be greatly missed by many.

The services for Joe will be held outside in the field behind the funeral home. Masks and social distancing will still be required.

Joe will be in our hearts and memories forever.
We were lucky enough to work with Joe and got a chance to see what a great man he was. We will miss him dearly and wanted to extend our sympathies to the family.
May he Rest In Peace

I had the good fortune of being able to work with Joe at the Smithsonian. He was smart, professional and a person anyone would be happy to work with. I also considered him a great friend.
With Joe, no matter the situation or circumstance, there was always a way to get through it and most importantly find a way to laugh. That is what I will remember the most. I don’t think there was a time that any interaction with Joe didn’t result in a smile or laugh. He was great.
I consider it a blessing and am thankful for the time I got to spend with Joe. I will miss him.

Death is a horizon, and a horizon is nothing but the limit of our vision. When we mourn for a person, others rejoice to see him back behind the border.
Rest in Peace🕯️
We mourn with you and are with you in our thoughts
Renate+Flori 😔

I was fortunate to know the Torre family since I taught Gina and coached Kathy at South River High school in the late 70’s and early 80’s. My prayer is for comfort for those left behind. He has left us to early.

Everyone who had the pleasure to work with Joe, loved to work with Joe. His dedication to Smithsonian was evident by all who knew him. His talents were endless too, and he could problem solve with the best. We have lost one of our most cherished employees and he will be sincerely missed. My heartfelt condolences go out to his dear family, and please know that our Smithsonian is grieving his loss.

My sincere condolences to the family. I had the pleasure of working very closely with Joe during the design and construction of the National Museum of African History and Culture. He always had a smile and a twinkle in his eyes. He spoke proudly of his “girls” and we saw him fight this illness with much courage to be there for them. He will be greatly missed, but will live forever in our hearts.

My heart sank on hearing of Joe’s passing. I had the privilege of working with Joe on the construction of the Smithsonian’s National Museum of African American History & Culture over a span of 4 years. Joe was not only a intelligent engineer, he was also a humble, kind, thoughtful & gentle spirit. The biggest impression Joe made on me was not just how brilliant he was, but how much of a devoted father he was to his beautiful girls. I recall how he enjoyed bringing his daughters to the project on the “bring your child to work” day every year. His dedication to ensuring that he spent as much time as he could with his girls also encouraged me to do the same with my daughter. I recall the joy on his face when having conversations about visiting the other museums and attending special events with his daughters. He was a good, kind-hearted man that left positive imprints on the lives of people like myself. He will be sorely missed. Rest In Peace dear friend. 🕯
My deepest condolences go out to his family.

I’m not in the state . Wish I could be there . Lots good memories with joe . Such a nice kind guy .🙏🙏🙏
Steve t