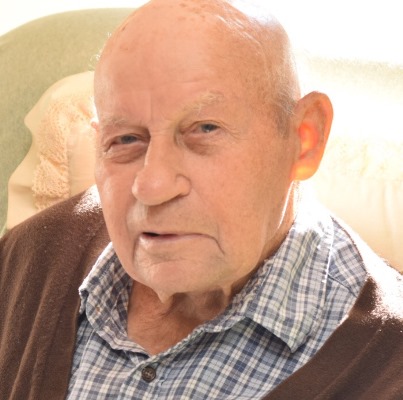 James Thomas Fowler, Sr., “Tom”, passed away April 22, 2016 just nine days shy of his 96th birthday. Tom was born May 1, 1920, in Wallville in Calvert County. He spent his first twenty years with his family on Point Farm, now known as Jefferson Patterson Park. As that park was developed he was a valuable source of historical information related to the farm.

In 1940, he and his family moved to the Fair Haven area of Anne Arundel County where they eventually settled on the Tacaro Farm owned by the Chewning family. Tom and his wife Thelma (nee Gatton) lived there for 35 years where they raised their two sons James, Jr. and William. Tom and his father bought a farm on Jewell Road in the early 1950’s. He and Thelma and their sons all eventually built homes there where grandchildren and great-grandchildren were raised.

Tom, a lifelong famer, raised tobacco on many different farms until 2000, and even then continued to be very active on his home place. Tom’s love beyond the land included family, friends and Friendship United Methodist Church where he was a faithful member for more than 70 years. He and Thelma served together there as custodians for more than 45 years.

Tom was preceded in death by his wife of 61 years, Thelma Fowler and sisters Lorena Callis and Alice M. Tudor. He is survived by his sons James T. Fowler, Jr. and his wife Sharon and William F. Fowler and his wife Gail. He is also survived by grandchildren Sherry and Lorie Grierson, Erin Hitchman, Brittany Koziana, Scott Fowler, Michael Langley, Jr. and Christina McClure; great-grandchildren Katelyn, Harley, Courtnie, Keith, Madison, Mikayla, Jessie, Nathan, Eric, Collin, and Alexis, as well as a brother Willis A. Fowler of Friendship and sister Catherine Frances Armiger of Edgewater.