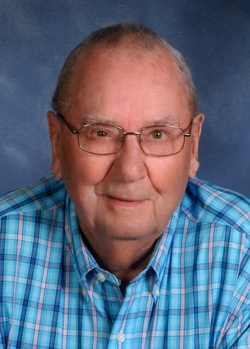 James Harry Dowell, 89, of Owings passed away November 30, 2016 at Calvert Memorial Hospital. He was born in Owings on the Dowell family farm September 7, 1927 to Henry Wilson, Sr. and Minnie (Catterton) Dowell. James was raised on the family farm and graduated from Calvert High School. He married Marie Tucker in 1948 and they made their home on the farm in Owings. James was a farmer and carpenter for many years and was primarily employed as an inspector with Calvert County Inspections and Permits for 25 years, retiring in 2003 as the Head of Inspections. James was a lifelong member of Mt. Harmony- Lower Marlboro United Methodist Church and the Calvert County Farm Bureau. James was a hardworking man who enjoyed farming, going to farm sales, traveling with his best friend Gail Mixon and spending time with family.

James was preceded in death by his wife Marie Tucker Dowell. He is survived by children Bonnie D. Frederick and her husband Ray of Jacksonville, FL, Janet D. Hall, Diana D. Spicer and Jamie K. Dowell and his wife Kelly, all of Owings. He is also survived by 7 grandchildren, 1 great grandchild, sister Mary Catterton and his best friend and companion Gail Mixon.