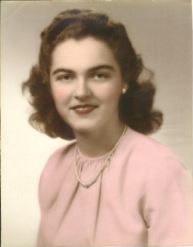 Isabelle Pearl Plummer, age 88, of Dunkirk passed away September 16, 2015 at her home. She was born April 11, 1927 in Dunkirk to Ralph Earl and Lena Pearl (Whittington) Sunderland. She grew up in Bristol and graduated from Southern High School. She worked for a time with the American Red Cross. Isabelle was married to Drury Collinson “DC” Plummer at Wesley Chapel United Methodist Church on October 18, 1947.
She was a life- long member of Wesley Chapel United Methodist Church, a member of the United Methodist Women and the South County Senior Group. Isabelle was dedicated to serving her church and her community.
She was preceded in death by her parents, her husband DC on November 18, 1998 and two brothers Ralph Clay “Buddy” Sunderland and William Carroll Sunderland.
Surviving are her son Donald C. Plummer and his wife Michelle of Lorton, VA, grandson Daniel Plummer of Jacksonville, FL, granddaughter Molly Plummer of Lorton, VA and sister Patricia Wood and her husband Roy of Dunkirk, MD.