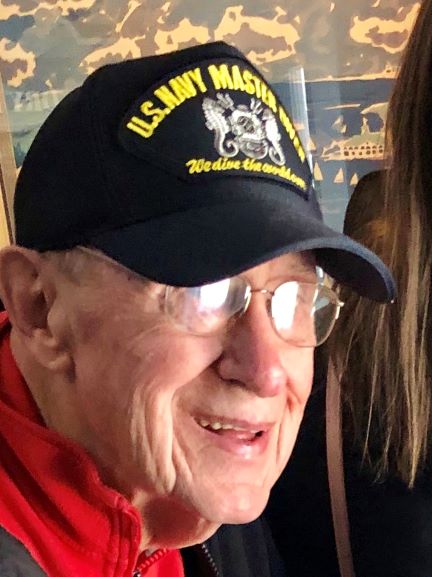 Harold Stamey Liddle, USN DCCS, Master Diver, 88 of St. Leonard, Maryland passed away peacefully on the early morning of April 3, 2020 in his home surrounded by family.

Mr. Liddle was born in Galax, Virginia on December 9, 1931 to Heath J. and Ella Mae Liddle. His parents and brothers Nelson and Rudolph preceded him in death.

Mr. Liddle joined the US Navy in 1947 and lived the Navy’s motto of “It’s not just a job, it’s an adventure”. He graduated from US Navy Diving School in 1954 and became a US Navy Master Diver in 1963 and achieved the rank of Senior Chief Damage Control Master Diver. Among the ships he served on were the USS Greene, USS Cone, USS Sperry, USS Chanticleer and USS Tringa. He crossed the international date line twice and the Arctic Circle. He was a veteran of the Korean and Vietnam Wars and loved the time spent when deployed to the Mediterranean. Among various accommodations were one for raising a chemical filled barge in Louisiana in the Mississippi River and one for expert salvage and guiding of the USS Seawolf (SSN 575) submarine which ground off the coast of Maine in 1968. He remained active in the ASR ARS Association and the US Navy Divers Association.

He met his future wife Betty, while assigned to the Naval Ordnance Laboratory Test Facility at Solomons, MD. He often joked that he had walked across the Patuxent River, of course, on the bottom and shared many tales of rescues. Subsequent assignments were in San Diego, CA.; the Diving School at the Washington, DC Navy Yard and finally his second tour at New London, CT. He enjoyed lifelong friendships with his Navy Diving friends including Trotter, Brown, Garvin, Luke and many others.

After retiring from the US Navy in 1968, Mr. Liddle started commercial diving business in the mid-Atlantic region. For the following 20 years, Harold Liddle Divers was the preeminent diving company in the region servicing customers such as PEPCO and BG&E along with many pipeline and bridge projects.

Mr. Liddle was also a member of the Southern Maryland Corvette Club, Solomons Island Yacht Club and proud of being a Freemason of Thomas J. Shyrock Lodge 223, Hollywood, MD since 1988. In addition, he and Betty enjoyed the many relationships and friends in Calvert County and was very proud of his family.

Due to the COVID-19 situation there will be a private ceremony. In lieu of flowers, if desired please send donations to Calvert Hospice, PO Box 838, Prince Frederick, MD 20678.

Sending our deepest condolences. He was such a sweet person. If there is anything we can do for you, please let us know.
Buddy & Cissy McDowell

Oh Betty, I am so sorry to hear of Harold’s death. Sorry too that due to COVID19 I will not be allowed to express my condolences to you, and family, in person. I so enjoyed the many chats Harold and I had at the Yacht Club and at his welding shop. Every time he welded something for me I would come back a week later and tell him the weld failed. He only fell for that once. I will miss that fine man. May he rest in peace. Ted

Dear Betty,
Dorothy and I just learned of Harold’s passing and we hasten to send our most sincere sympathies to you and your family. We enjoyed so many conversations with him in the past and will remember him fondly. We wish we could be with you in person but will keep you in our prayers.
Bobby Swann

Please accept my condolences on the loss of Mr. Liddle. Thoughts and prayers go out to you and your family.

Harold was a wonderful, caring man, I rented from him & Ms. Betty way back in the mid 80’s and have LOVED both ever since.
May God wrap his comforting arms around you & your family Ms Betty
Fly high with the angels Mr. Liddle

So sorry to hear. Harold and you Betty were the perfect couple. We always loved running into you both. He will be missed but we know where he is.

We are so sorry for the loss you are experiencing. Mr. Liddel will always be remembered as a sweet, generous, kind man. We will treasure our memories of him always.
Danny and Doris Pritchett

Betty, our thoughts and prayers are with you and your family at this time of loss. Prayers for peace and comfort for everyone.

Yvonne , So sorry to hear about your Dad. He was well liked in Calvert County another Icon Gone but not forgotten.

You are in my thoughts and prayers. Lifting you up in into the light of God’s love. May you be filled with God’s peace.

Mrs. Liddle, our thoughts and prayers are being sent to you and your family during this difficult time. Prayers for peace and comfort.

Betty, so sorry to hear of Harolds passing. Carlos so enjoyed his visits to the shop for those difficult weldings no one else could do. May God comfort you at this time.

So sorry to hear this Ms. Betty, Vonnie, and David. You are all in my prayers.

Betty and family. We are so saddened to hear of this. Harold was such an amazing person. He will be missed. You know that he is up there in heaven with a lot of his pals. God bless. Melissa and Mike McCormick

Mr Little was my neighbor next door. Loved going over and talking to him. Missed him so much after he closed the shop. RIP my friend.

Betty, Sorry to hear about Harold. We will miss him and all his great stories about his navy days. John and I had wonderful dinners with you both at our famous Gateway Resturant. Our prayers are with you and your family. With all our love to you John and Barbara Glasgow

Rest in Peace my Friend.

It is with great sorrow that I feel for your whole family. Bud knew Harold and enjoyed his many stories, he was one of his idols with his many, many achievements during his life. If there is anything we can do to help, please let us know.
God bless you all,
Dorothy & Bud Seville