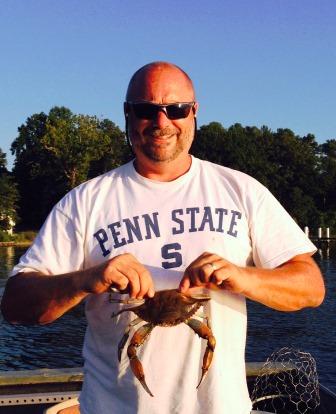 Born and raised in Monaca, Pennsylvania on December 28, 1962, Guy is survived by his loving wife of 30 years, Cindy, their only daughter Kristen, his parents Guy and Barbara Grater, two brothers Mark Grater and Gary Grater, his sister Barbara Nelson, as well as many extended family members. Guy was a proud Pennsylvania State University graduate, class of 1984. He worked as an electrical engineer in Annapolis, Maryland for Cardinal Engineering, and was an avid fisherman ever since first coming to Anne Arundel County over 30 years ago.

The only thing this beloved man enjoyed almost as much as being with his family, was being on the water with his boat, the Lion King. The family pet, chocolate lab rescue Captain Morgan, was constantly at his side and it has been proven that he has trained her to spot crabs right off the piling. His outstanding work ethic both in his career and personal life as well as strength of character made Guy the man, husband, father, son, brother, and friend that he was.